Georgia Northwestern Technical College (GNTC) student Ryan Fincher of Cedartown was honored by the American Welding Society (AWS) for winning the gold medal in the Welding Competition at the 2017 SkillsUSA National Leadership and Skills Conference held this summer in Louisville, Ky.

Rene’ Engeron, chairman of the Atlanta section of AWS, presented Fisher with the Robert J. Conkling Memorial Award and a check for $250 on behalf of the AWS Board of Directors.

“Skilled trades are in very high demand right now and our country was literally built on welding,” said Engeron.

The award is dedicated to Robert J. Conkling who contributed extensively to the development of the AWS Welding Show and Convention. 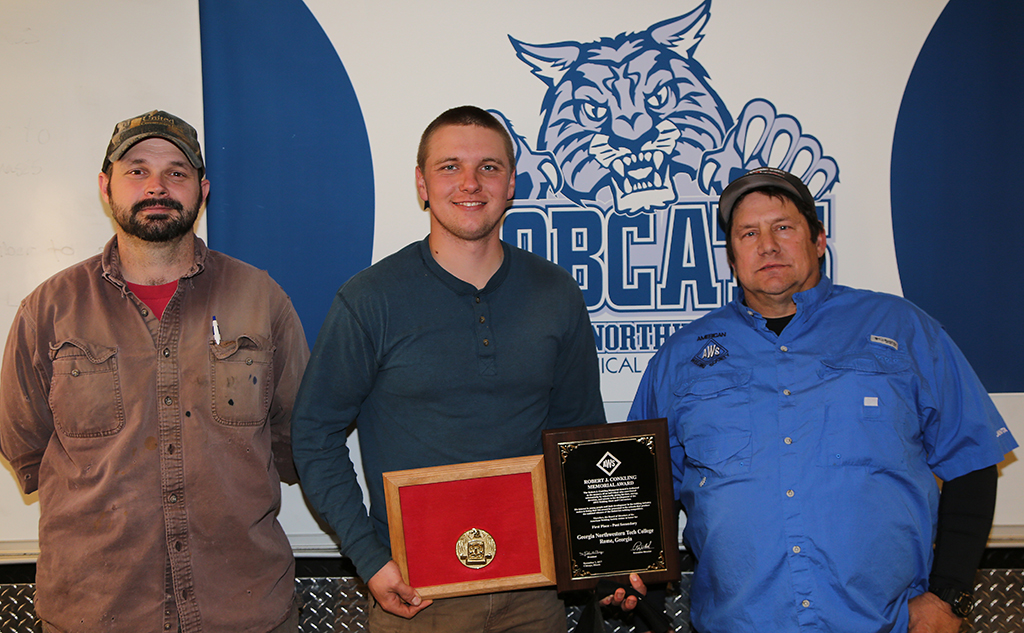 GNTC student Ryan Fincher (center) of Cedartown was presented with the Robert J. Conkling Memorial Award by Rene’ Engeron (right), chairman of the Atlanta section of the American Welding Society. Also pictured is Joe Burrage (left), director of the Welding and Joining Technology program at GNTC.

“Winning the gold medal in SkillsUSA’s National Championships felt like a huge accomplishment,” said Fincher. “It felt pretty awesome being able to compete with some of the best welders in the nation and coming out on top.”

Fincher also was a top six finalist for the American Welding Society’s U.S. Invitational Weld Trials that were held a year ago at Robotics Technology Park in Huntsville, Ala.

Every two years, the AWS invites the top 48 welding competitors from the National SkillsUSA Championships to compete in the four-stage competition that decides the SkillsUSA World Team Welder. All competitors were state champions and competed at the national level for SkillsUSA. Fisher was one of the six national finalists that was chosen to participate in the second stage of the competition.