The Weld Trials is part of the American Welding Society’s process to select the SkillsUSA World Team Welder to represent the United States at the 2017 WorldSkills Welding Competition in Abu Dhabi, United Arab Emirates.

“It felt pretty awesome when I found out I made the top six,” said Fincher. “Like I had accomplished something really big.”

Every two years, the AWS invites the top 48 welding competitors from the National SkillsUSA Championships to compete in the four-stage competition that will decide the SkillsUSA World Team Welder. All competitors were state champions and have competed at the National Level for SkillsUSA. Six finalists are chosen to participate in the next stage of the competition. 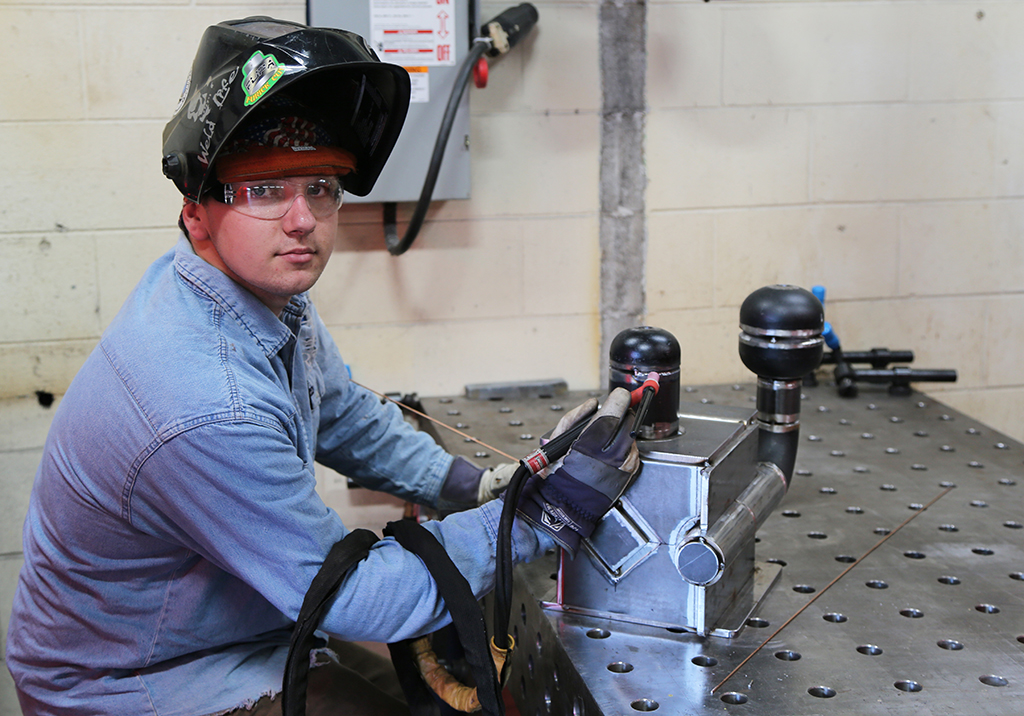 GNTC student Ryan Fincher works on a project in the Welding and Technology lab on the Floyd County Campus.

Fincher is currently competing in the second stage of the Team USA Welder Selection competition with five other semi-finalists from around the nation. Three finalists will be chosen at the Weld Trials to go to the next level to compete to become the U.S. representative in the international competition against the best WorldSkills welders from other countries

The SkillsUSA World Team Welder will be selected from the top three finalists at the AWS TeamUSA Finals and will receive a $40,000 scholarship in addition to representing the U.S. in the WorldSkills Welding Competition.

“There have been weeks where we have worked six or seven days, on and off campus, for the last two and a half months preparing for this competition,” said Matt Hayden, GNTC Welding Instructor. “It has really paid off for Ryan and I am looking forward to his continued success.”

Participants must be active SkillsUSA members who are enrolled in, or have graduated, from a welding program and must be younger than 23 during the year of the WorldSkills Welding Competiton.

Steve Minshew of Holston Gases in Rome, Southeastern Hose in Bremen, and Hank and Ricky Woods of Woods Fabrication in Taylorsville provided sponsorship for Fincher both financially and with materials.

Georgia Northwestern Technical College provides quality workforce education to the citizens of Northwest Georgia. Students have the opportunity to earn an associate degree, diploma, or a certificate in business, health, industrial, or public service career paths. This past year, 13,734 people benefited from GNTC’s credit and noncredit programs. With an annual credit enrollment of 7,876 students, GNTC is the largest college in Northwest Georgia. GNTC has an additional enrollment of 5,858 people through adult education, continuing education, business and industry training, and Georgia Quick Start.