A damp and eerie morning in Northwest Georgia set the scene November 30 for an Active Shooter Drill held on the Catoosa County Campus of Georgia Northwestern Technical College (GNTC). Local and state authorities from multiple departments, as well as more than two dozen students, took part in the live exercise.

“Our students got a real opportunity to take part in a hands-on emergency situation right on our campus,” said GNTC Emergency Medical Technician Director Claudio Leyssens.

Just after 10 a.m. on the Friday morning, it would only take a pair of gunmen a few seconds to make their way through the campus lobby and up a flight of stairs. As soon as the first shots rang out, the feeling that this was still just a practice drill immediately disappeared. From the parking lot, you could see the gunmen in the windows going from room to room. The feeling of a drill was over.

The sounds of weapons discharging their ammunition throughout the Ringgold, Georgia complex quickly sent emergency workers and student participants hurrying to their roles in the emergency drill. Within minutes, the first responders would arrive and begin the search for the gunmen. Although it was just a practice run, it would have been hard to make it feel more real. 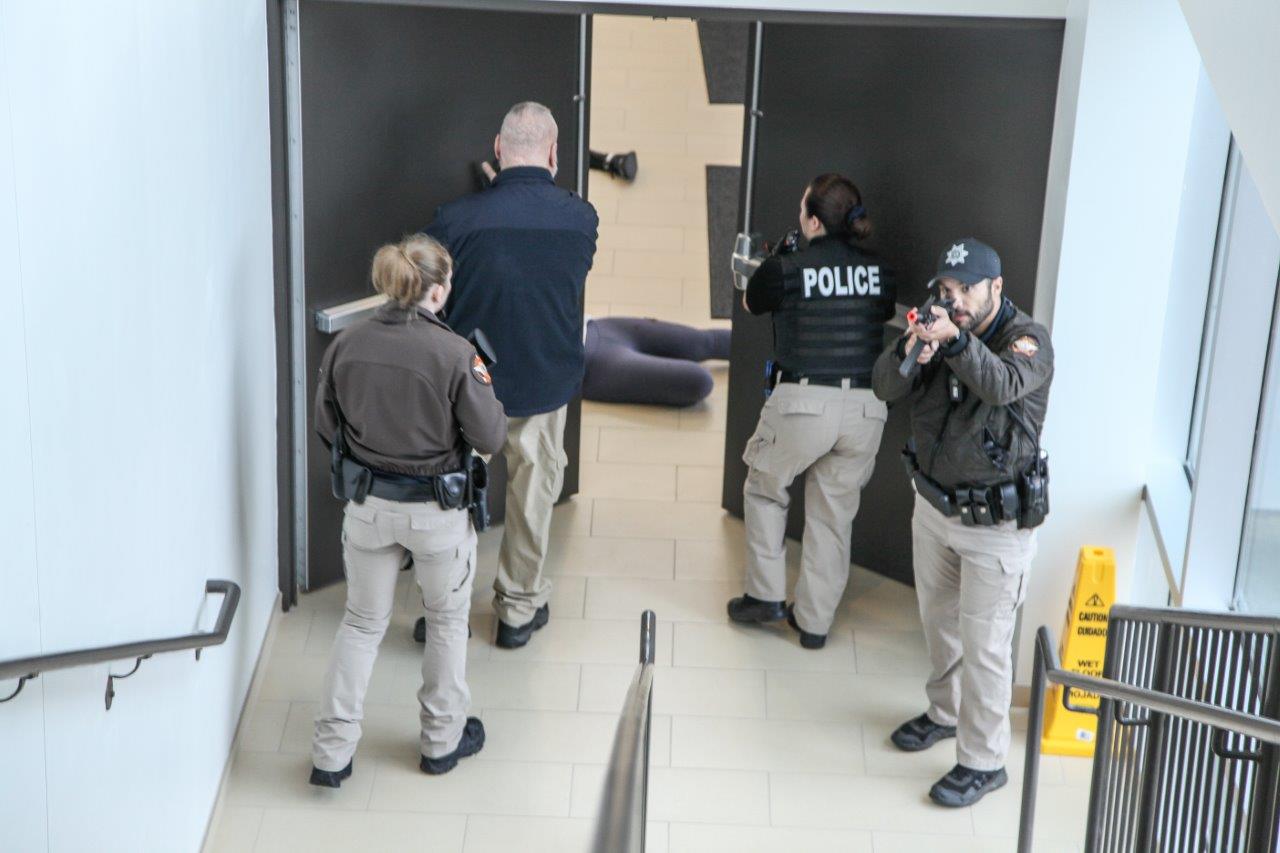 “This is the age we live in,” said Georgia Northwestern Technical College Police Training Coordinator Gary McConathy. “These sort of drills are a necessity to help protect us from dangerous events. After the shootings that have made headlines across the country over the past few years, we have to do our part to not only help us be prepared, but to allow our local authorities an opportunity to train in a true-to-life exercise.”

First responders would move methodically throughout both floors of the 60,000-square foot facility searching for the suspects. “Those first on the scene have one main goal,” said McConathy. “The goal is to stop a shooter. Those first officers won’t stop to assess injuries. With each additional minute that passes that they have not detained the gunman, that’s one more life that could be on the brink because of it. You have to stop the threat.”

Although the drill organizers are still breaking down the data from the drill, students on hand had their results immediately. “When the weapons discharged, it grabbed the attention of all of our students,” said Leyssens. “I’ve taken part in several disaster drills. However, this was my first active shooter drill. This drill really helped train emergency responders as well as my students going into the field. I really feel like it has the potential to help keep our campuses safer than others. You just don’t hear about a lot of drills taking place like this at other colleges.”

In Calhoun, Georgia in October 2017, GNTC’s Gordon County Campus hosted an Active Shooter Drill. The college’s Floyd County Campus was the site of a similar event in 2014 in Rome, Georgia. In 2011, the Walker County Campus of GNTC also hosted a similar exercise in which authorities across the region responded to the drill at the Rock Spring, Georgia facilities.

Georgia Northwestern Technical College provides quality workforce education to the citizens of Northwest Georgia. Students have the opportunity to earn an associate degree, diploma, or a certificate in business, health, industrial, or public service career paths. This past year, 16,402 people benefited from GNTC’s credit and noncredit programs. With an annual credit enrollment of 7,750 students, GNTC is the largest college in Northwest Georgia. GNTC has an additional enrollment of 8,652 people through adult education, continuing education, business and industry training, and Georgia Quick Start.  GNTC is a unit of the Technical College System of Georgia and an Equal Opportunity Institution.