A Labor of Love

After 90-hours of carefully constructing his 15th gingerbread display, Chef Greg Paulson, Georgia Northwestern Technical College’s (GNTC) director and instructor of the Culinary Arts program, put the final touches on his gingerbread replica of the Woodlee Building before moving it to its final destination on the Floyd County Campus.

“It has truly been a labor of love,” said Paulson, who has been making gingerbread displays of all sizes since 1987.

The 109-year-old house and newly renovated teaching kitchen currently holds the college’s Culinary Arts program. Its period style architecture is what inspired Paulson to undertake creating a 1/4 inch to 1-foot scale replica of the turn of the century dwelling. To prepare for the project, the program director took photos of the outside of the house to ensure he could accurately portray the style of the 1910 home.

“I’ve probably walked around this house 1,000 times,” said Paulson. “Because of the unique architecture of the house with its windows and roof pitches it was a challenge to do it to scale.”

Over the years, the Woodlee Building has had several different owners, names and served a variety of purposes the chef said. General Electric once laid claim to the house during the 50’s and during that time Ronald Reagan, the 40th president of the United States, stayed in the house during his acting career according to Paulson 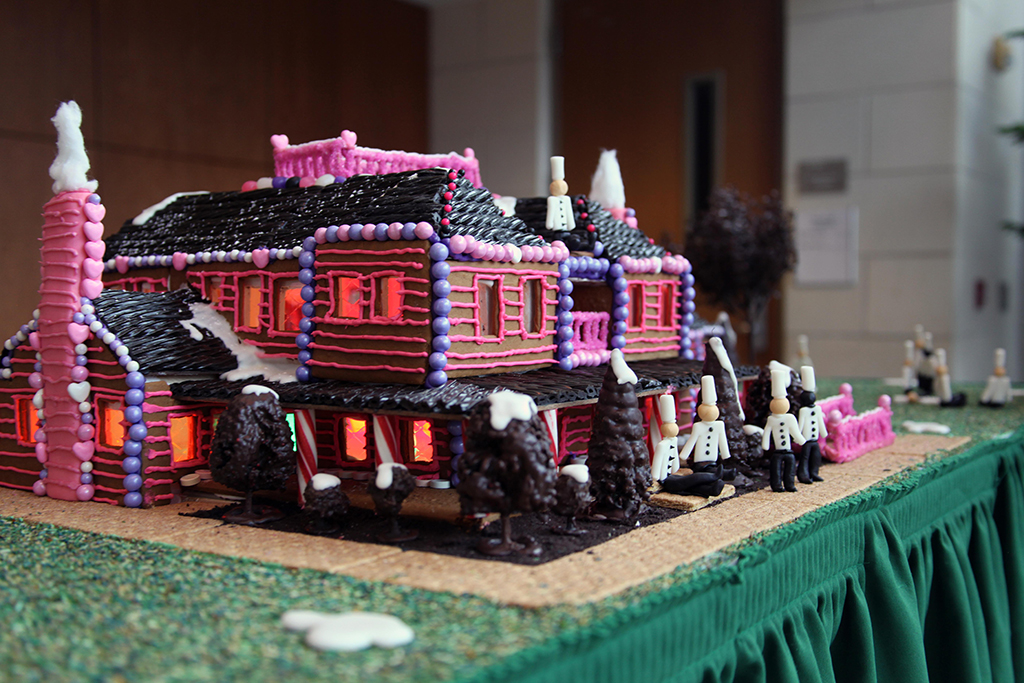 A 1/4 inch to 1-foot scale replica of the over 100-year-old Woodlee Building stands in the lobby of the H Building on GNTC's Floyd County Campus courtesy of Chef Greg Paulson, director and instructor of the Culinary Arts program. The building has served many purposes over the years including providing temporary lodging for former President Ronald Reagan during his acting career.

In the 80’s, the Woodlee Building functioned as a restaurant before being renovated and updated by the college to train students in Culinary Arts in 2009.

Paulson said the newest addition to his gingerbread portfolio was about recreating a building that is well known in Floyd County Community. The chef said he didn’t do it for the recognition or “to put a feather in my cap.”

Throughout his career, Paulson has created gingerbread displays around the country with several winning contests and awards. While he served as sous chef at The Century Plaza Hotel in Los Angeles, Paulson made a gingerbread Beverly hills mansion which was submitted by another chef into a contest without his knowledge.

“I didn’t even know it was entered until I received the award and prize money,” he said.

Following this success, Paulson began making gingerbread displays more regularly varying in size and complexity. While he served as the executive chef at the Mayflower Park Hotel he created a large recreation of downtown Seattle where the hotel was located and included a working monorail train.

After creating in kitchens along the West Coast and down into Hawaii, Paulson brought his talents to the Southeast where he took a job in Rome at the Coosa Country Club. In Rome he recreated the downtown area, the country club itself and finally a 12-foot replica of the town’s clocktower, complete with working clocks, all made out of cookies and candy.

The Woodlee Building display is actually not the first time the Chicago born chef has undertaken a large gingerbread display while serving as the GNTC director of Culinary Arts. Paulson was featured in the premier issue of Rome Life magazine in 2015 when he created a large cookie display of Noah’s Ark for the cover.

The chef’s most recent passion project was finished up in the real Woodlee Building’s kitchen and brought over to the H Building lobby on GNTC’s Floyd County Campus where it will sit for a few weeks as the Christmas season gets underway. The replica of the over 100-year-old house and teaching kitchen features a lit interior, cars of students and staff as well as tiny chefs-to-be scattered around the grounds.