The exercise served as training for local police and emergency responders to test the response capacity and coordination between GNTC and public safety agencies in the Calhoun area.

In the drill, three cars were lit on fire as part of the training and scenario. This was meant to simulate a disgruntled person coming to the college and creating a diversion. The “active shooter” then went into Building 300 and began causing “casualties.” There were two “active shooters” in the exercise. 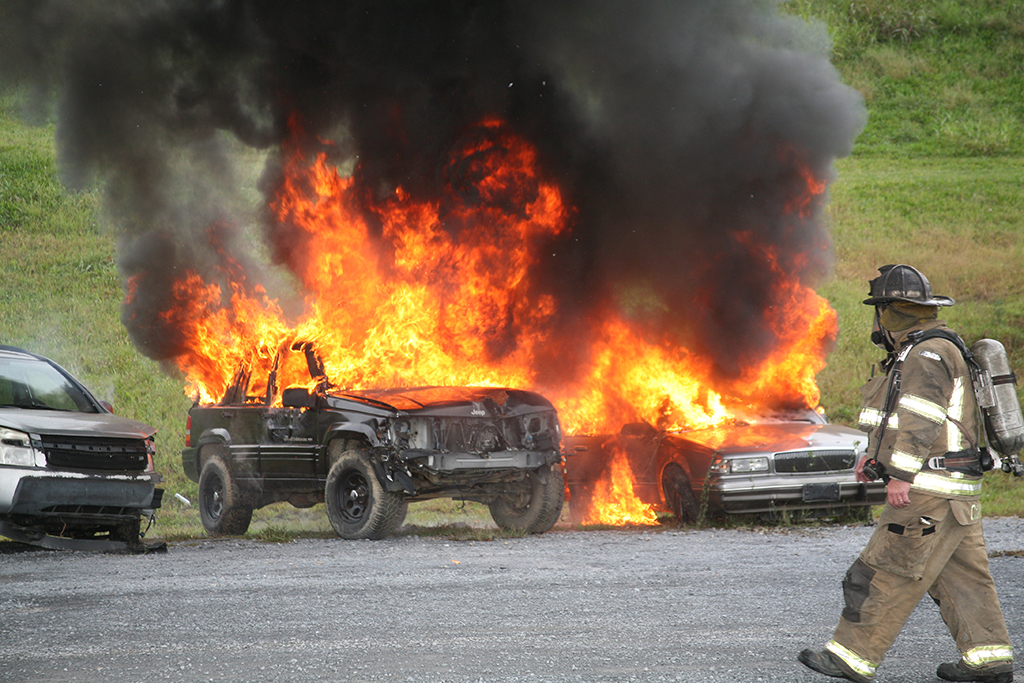 Three cars were lit on fire as part of the Public Safety Training Exercise held on GNTC’s Gordon County Campus. This was meant to simulate a disgruntled person coming to the college and creating a diversion. While firefighters were tending “casualties” and putting out the fire, one of the “active shooters” began opening gunfire on emergency personnel.

The initial call to emergency responders was for the vehicle fire, so the Fire Department showed up prior to law enforcement. While the firefighters were tending “casualties” and putting out the fire, one of the “active shooters” came back outside and began opening gunfire on emergency personnel. The “active shooter” then re-entered the building to cause additional casualties and law enforcement responded to the scene.

“It’s important to train for the worst,” said Detective Seth Densmore of the Calhoun Police Department. “The timeframe in the response is crucial because the longer it takes for someone to contact us and let us know that this is happening, the more casualties we are going to have, so the key is the speed.”

Since time is of the essence with any kind of mass casualty, training like this is important since it involves different emergency agencies working together to identify better ways to communicate and respond.

“It is imperative that the men and women who make the decisions for their prospective department have a unified command in these situations,” said Densmore.

GNTC staff, students, and faculty volunteered as “victims” for the drill and went through makeup to have fake bullet wounds applied to them prior to the drill. They also were assigned different roles to play for the drill, such as one “victim” that had a heart attack after the shooting began and another “victim” acted hysterical and problematic with the first responders when they arrived.

“I think as far as safety goes everybody did really well,” said Tom Bojo, dean of academic affairs at GNTC. ”That’s always goal number one when you do these type of drills.”