“I was nervous, but it was probably one of the best experiences I’ve ever had,” said Fincher. “It was a very eye opening experience how the people in China treat their guests. They have a lot of hospitality.”

Fincher’s trip to China was part of his preparation to compete in the four part Team USA Welder Selection competition that decides which SkillsUSA welder will represent the U.S. in the international WorldSkills Competition that takes place every two years. 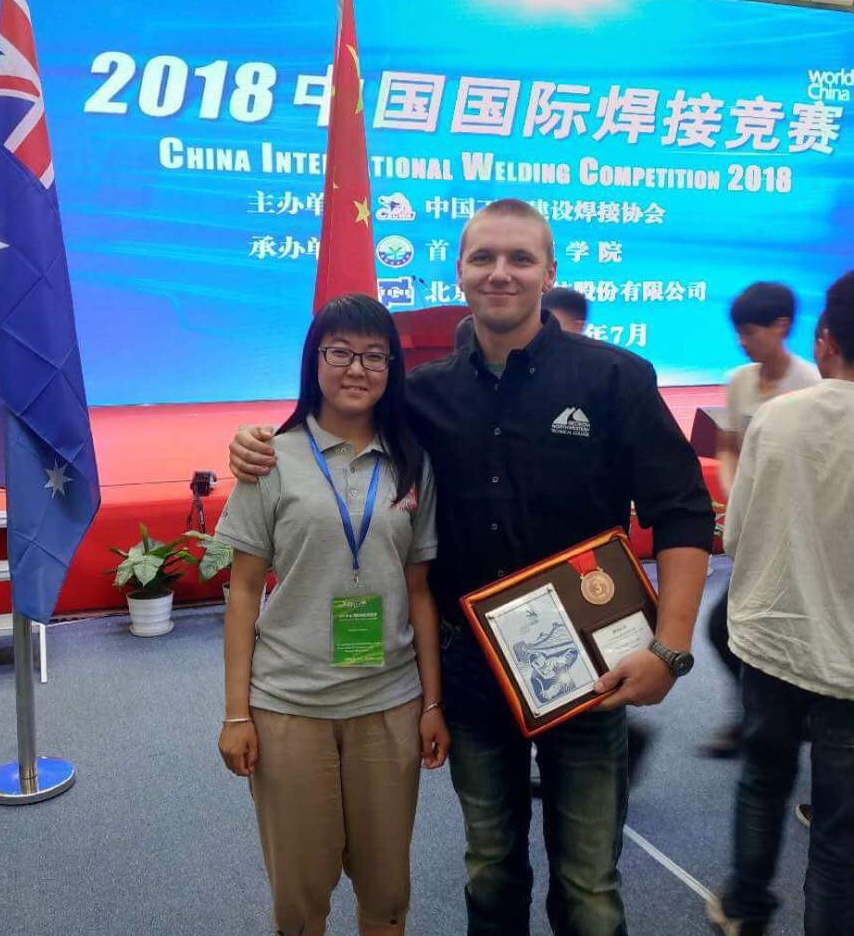 Ryan Fincher (right) of Cedartown poses for a picture with his interpreter after winning the bronze medal in in the China International Welding Competition 2018 in Beijing.

Fincher said that the international trip helped him learn some tips and techniques that he thinks will make him a better welder.

“Everything was metric at the competition in China,” said Fincher. “U.S. welders measure wire feed speed in inches per minute, there it was millimeters per minute, so I was having to convert all of my work from standard to metric.”

Every two years, the AWS invites the top 48 welding competitors from the National SkillsUSA Championships to compete in a four-stage competition that will decide the SkillsUSA World Team Welder. All competitors were state champions and have competed at the national level for SkillsUSA.

The first stage of the Team USA Welder Selection competition begins with the AWS U.S. Invitational Pre-Trials. Contestants are given a set of WorldSkills welding projects to complete in their home states. The projects are then sent to the AWS Skills committee that will choose the top six for the next stage.

The top six pre-trial finalists then compete for the top three positions at the AWS U.S. Invitational Weld Trials.

The SkillsUSA World Team Welder will be selected from the top three finalists at the AWS TeamUSA Finals and will receive a $40,000 scholarship in addition to representing the U.S. at the WorldSkills Competition.

Participants must be active SkillsUSA members who are enrolled in, or have graduated, from a welding program and must be younger than 23 during the year of the WorldSkills Competition.

Fincher is the only top six finalist from 2017 that will still be under 23 when the 2019 WorldSkills Competition takes place, which is why he was selected by the AWS for the competition in China. Fincher is currently competing in the pre-trials to select the 2019 SkillsUSA World Team Welder and the top six finalists will be announced on Oct. 15. The competition to select the top three finalists will take place Dec. 3-9.