Alain and Lydie Stempfle started one of the longest days of their lives by shooting across France at speeds of nearly 200 miles per hours to catch a flight in Paris, France. They would then spend the day flying 30,000 feet above the Atlantic Ocean for nine hours at speeds nearing 500 miles per hour before touching down in Georgia.

As amazing as that race around the planet appears to be, none of that trip would be the most interesting part of their mid-summer’s journey.

The Stempfle family came to the states to visit life-long friend, Fabrice Sainton. A staffer at Georgia Northwestern Technical College, Sainton works closely with the college’s security and Law Enforcement Academy. But more than 30 years ago, he was a young man entering the police academy for the Police Nationale (National Police) in France with his friend, Alain.

Earlier this month, Alain, his wife, Lydie, and Fabrice got to visit with Georgia Northwestern Technical College Law Enforcement Academy Director Jim Pledger at the Calhoun Police Department firing range in Gordon County, Georgia. Right away, there was a noticeable difference that caught the eyes of the visiting officers. 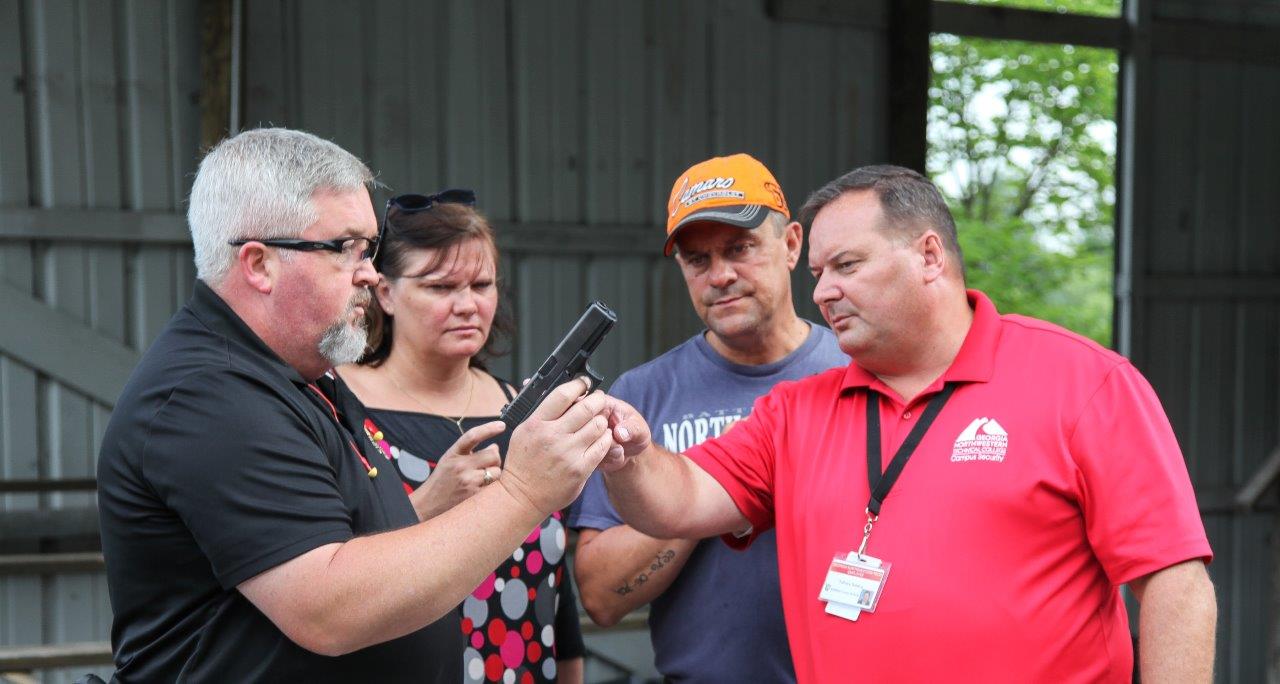 “There’s just a big difference in the equipment available to a police officer here,” said Alain. “The equipment officers have at their disposal is more intense. Rifles, heavy duty equipment, very high-powered patrol cars are all prevalent here. Officers aren’t so heavily equipped in France. And, the cars are definitely smaller.”

During the tour, Alain would get to sit behind the wheel of a Dodge Charger Calhoun (GA) Police Department Cruiser. The standard police version of the Charger comes complete with a 370-horsepower engine. The standard patrol vehicle for the Police Nationale in Vannes, France is a Peugeot 307. The much smaller patrol vehicle has 110 horsepower when it comes off of the Peugeot assembly line in Sochaux, France.

Calhoun (GA) Police Department Sergeant Tom Petty spent some time with the tour at the area firing range, as well. Petty, who serves as the Assistant Supervisor of the Criminal Investigations Division, is also the Firearms Range Master for the department. “We have weapons available in our (patrol) cars,” said Lydie. “However, we have two, or sometimes, three officers in a car when on patrol. The policing is a little different. We never have only one officer in a car or at any situation at any time.”

Lydie, a 24-year veteran, and her husband, Alain, a 31-year veteran of the Police Nationale (National Police) assigned to the city of Vannes, France police force, both got to feel some of the training experience future law enforcement officers encounter at Georgia Northwestern. Both husband and wife hold the ranks of Brigadier (Sergeant) within the force. However, Mrs. Stempfle will soon become a Supervisor (Chief). “She is the chief whether we are at work or home,” quickly answered Mr. Stempfle with a smile.

As for working on patrol, Alain rides a motorcycle in the force’s escort division. Lydie is in a patrol car. However, both see big differences in how they work with the public and how U.S. officers do the job. “It’s just a different society. It’s a different way of thinking,” explained Alain. “When someone gets pulled over in France, there isn’t a defensive posturing by the person who is being pulled over or questioned. If there is a police situation, the people appear to be more willing to help or assist the officer.”

In the couple’s combined 55 years of police force experience, only the husband has ever used his service weapon in the line of duty. “During a traffic stop, the motorist fired his weapon at my patrol,” said Alain. “It was the only time I ever fired my weapon on the job.”

When it comes to being on patrol, Pledger says he teaches his students that you need to learn how to properly control a situation. “We are teaching students when it is necessary, and when it is not necessary, to take any action,” said Pledger. “Knowing when to use force, and recognizing the amount of force necessary, is a huge part of doing the job well.”

Georgia Northwestern Technical College offers the Law Enforcement Academy program every semester on the Gordon County Campus in Calhoun, Georgia. To learn more about the program, you can call 866-983-4682. For information online, visit the college at GNTC.edu, as well as on GNTC’s Facebook, Twitter, Linkedin, Google+, WordPress, and YouTube channels. GNTC is a unit of the Technical College System of Georgia (TCSG) and an equal opportunity institute.