Fincher’s trip to China will be part of his preparation to compete in the four part Team USA Welder Selection competition that decides which SkillsUSA welder will represent the U.S. in the international WorldSkills Welding competition that takes place every two years.

Fincher was selected to be the American representative at the competition in China by the AWS. He will leave for China on July 22 and will return to the U.S. on July 31. The American Welding Society will cover all of his expenses.

“Winning the gold medal in SkillsUSA’s National Championships felt like a huge accomplishment,” said Fincher. “It felt pretty awesome being able to compete with some of the best welders in the nation and coming out on top.” 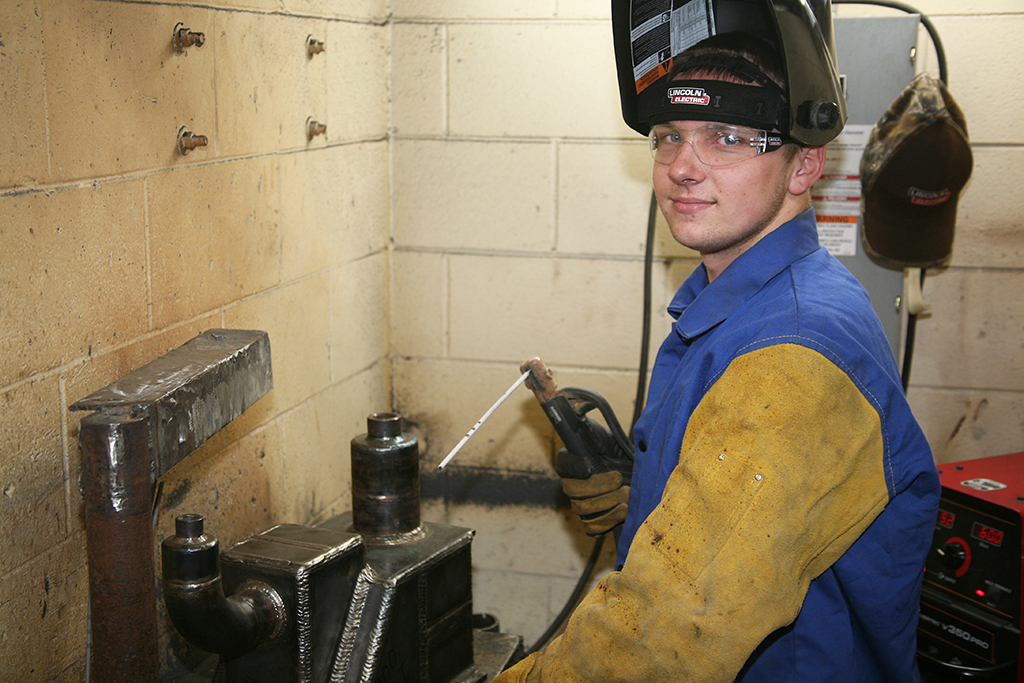 GNTC alumnus Ryan Fincher of Cedartown works on a project in the Welding lab on GNTC’s Floyd County Campus in Rome.

“It felt pretty awesome when I found out I made the top six,” said Fincher. “Like I had accomplished something really big.”

Every two years, the AWS invites the top 48 welding competitors from the National SkillsUSA Championships to compete in a four-stage competition that will decide the SkillsUSA World Team Welder. All competitors were state champions and have competed at the national level for SkillsUSA. Fincher was one of the six national finalists that was chosen to participate in the second stage of the competition.

Fincher is the only U.S. competitor that competed in the top six in 2017 that is going to compete in the Team USA Welder Selection competition again. This is why he was invited to China, according to Matt Hayden, instructor of Metals and Welding at Cedartown High School and instructor of Welding and Joining Technology at GNTC.

“Ryan is not just a great student and great welder, he is a great young man,” said Hayden “All of the success that he has had is the result of his work ethic and I fully expect him to be very successful in life in everything he does.”

The competition in Beijing that Fincher is attending is being held as part of the process to select China’s World Team Welder. Fincher will be taking part in the competition in China as practice for the four stage Team USA Welder Selection competition. Ray Connolly the chief welding expert for the U.S. will accompany Fincher to Beijing. Connolly won a gold medal at the WorldSkills Championship in Montreal, Canada in 1999.

“At our top six and top three competitions we always invite different countries to bring some of their best competitors over to build relationships with those countries,” said Hayden. “So that is what China is doing in return and this will be more practice for Ryan for the Team USA Welder Selection competition.”

“This is also the first time we have sent someone to China for this,” continued Hayden.

The first stage Team USA Welder Selection competition begins with the AWS U.S. Invitational Pre-Trials. Contestants are given a set of WorldSkills Competition projects to complete in their home states. The projects are scored by the AWS Skills committee and the students that submit the top six projects are invited to participate in the next stage.

The top six pre-trial finalists then compete for the top three positions at the AWS U.S. Invitational Weld Trials. The top six and top three compete along with other competitors invited from other countries.

“It builds relationships with those countries and the competitors get to know each other fairly well,” said Hayden. “At our last top six completion China sent their top two competitors and we have also had competitors from Australia, England, Canada, and Russia. So we always have other countries participate in the U.S. competitions.”

The SkillsUSA World Team Welder will be selected from the top three finalists at the AWS TeamUSA Finals and will receive a $40,000 scholarship in addition to representing the U.S. in the WorldSkills Welding Competition.

Participants must be active SkillsUSA members who are enrolled in, or have graduated, from a welding program and must be younger than 23 during the year of the WorldSkills Welding Competition.