Standing Tall in the Kitchen: A Military Vet’s Story

It was in a ditch in Cartersville, Georgia eight years ago this month when the life of Georgia Northwestern Technical College Culinary Arts student Sedric Floyd would unexpectedly change forever.

It was just after midnight when the United States Air Force veteran was headed for work at Shaw Industries Plant 15. Another vehicle ran a stop sign and collided with Floyd’s motorcycle knocking him unconscious and launching his body more than 90 feet through the air.

After sliding another 40 feet on the ground and into a nearby ditch, Floyd would regain consciousness and find part of his left leg lying next to his head. “I could see it,” recalled Floyd. “It just destroyed the left side of my body. The crash completely damaged my nerves on that side.” He would spend the next three weeks in a coma. 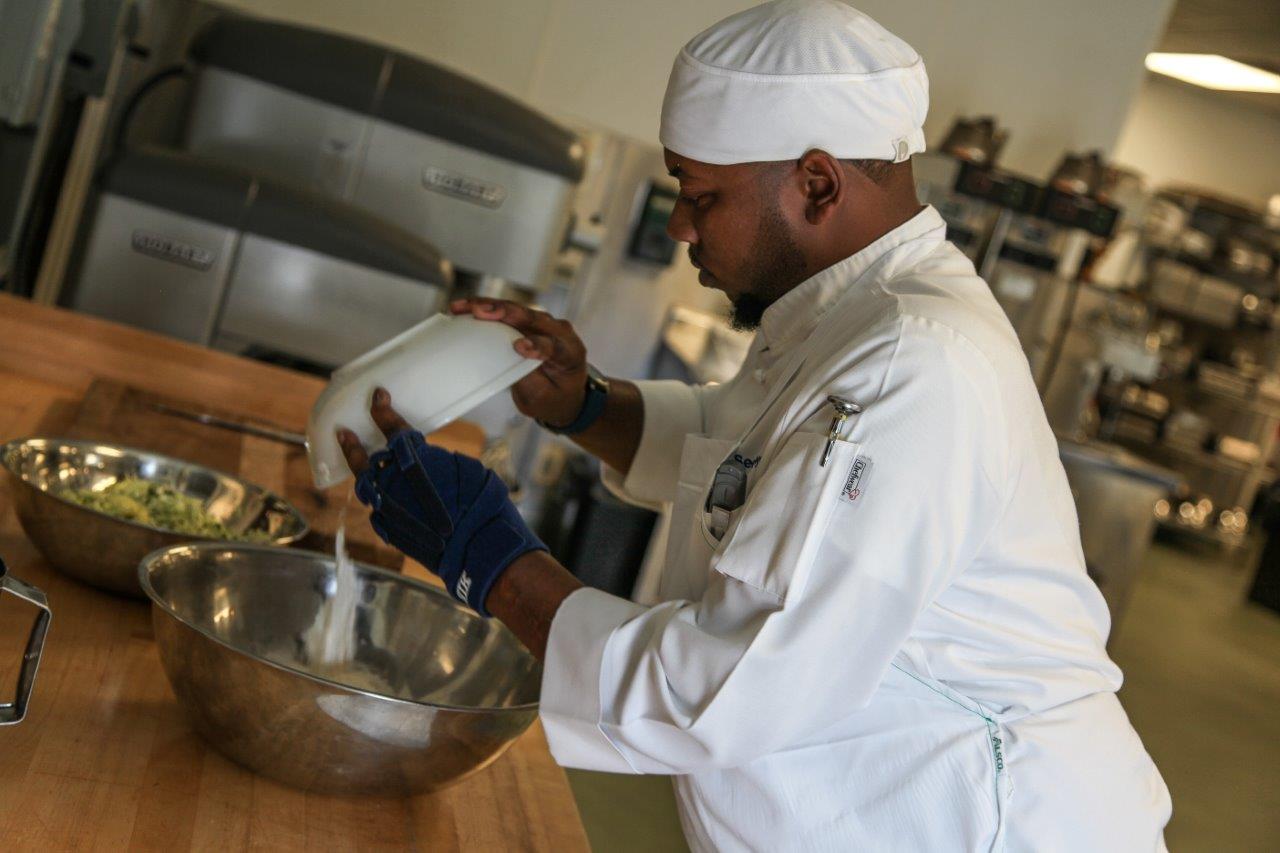 “When I was a little kid, I wanted to be a BMX bike rider,” said a smiling Floyd. “I loved doing all the tricks. I especially liked doing the ‘vert’ stuff, like doing the stunts in the air. I loved it.” But after a youth filled with dreams and eight years of military experience that took him around the world, the Northwest Georgia military vet who served as an Aerospace Ground Equipment (AGE) mechanic would now have to rebuild his life… and build a new career.

On the night of July 28, 2010, Floyd would be rushed to Atlanta Medical Center. In the months to follow, he would spend time at Emory University Hospital for his wound care, and then another stay at Atlanta Medical Center for rehabilitation. After the disastrous events of that summer, Floyd would finally be able to return home just before Thanksgiving. However, he’d quickly learn that the accident was just part of the battle.

“After the wreck and all the rehab, I had PTSD and physical pain to deal with,” said Floyd. “I had to sit in the bariatric chamber at Redmond for months. Three hours a day, four or five days a week, for about two months. It was a process which put my body under high oxygenated pressure to help heal my wounds. At that point, I was just sort of out in the world. I mean, dealing with the loss of a limb. I really felt like I was just hanging on.”

But, Floyd always was able to put on a strong front. A man with strong faith, the 37-year-old says he felt like he knew God had a plan for him. “My friends would always seem proud of me because I wouldn’t get torn up about stuff in life,” said Floyd. “I tried to just keep a smile on my face and make it through. But, my friend, Russell, seemed to know I needed something more.”

Russell Steele of Rome, Georgia is one of Sedric’s close friends. So close, they are now both enrolled in the Georgia Northwestern Technical College Culinary Arts program. “He’s just so good with food,” said Steele. “I knew that something like this program would be perfect for him.”

Last summer, during a visit to Wilson’s Rome, Georgia home, Steele convinced Floyd to apply to Georgia Northwestern. “It had been a long time since I had been in school,” said the Rome High School Class of 1999 graduate. “I went straight into the military out of high school. Going to college was a big step.” After doing exceptionally well in his collegiate placement testing, Floyd joined his friend and enrolled in the Culinary Arts program.

GNTC Culinary Arts instructor Chef Kasey Cromer knew from day one that Floyd would be successful. “Success in the dictionary is defined as the accomplishment of an aim or purpose,” said Cromer. “This is exactly why Sedric will do well in the culinary field. When he does something, new or familiar, he goes at it with a sense of purpose. He has such a great attitude about it. He lets nothing get in his way.”

However, one of the first obstacles for Floyd didn’t come by way of a ladle or a butcher’s knife. “When I first came to class, I came standing up. I was wearing my prosthetic leg,” said Floyd. “However, due to problems with how the prosthetics attach to my particular kind of amputation, it can become incredibly painful to use. That’s when I’ll use the chair.”

Worried about how it would impact him in the classroom, he spoke with the instructors about having to use his chair in the classroom. “Chef Greg (Paulson) and Chef Kasey (Cromer) told me to do whatever it takes to make sure I was in class,” said Floyd. “They said they’d work with me and help me succeed. They just kept telling me that I was doing great. That meant a lot.”

Much like his years of multiple military deployments with the United States Air Force, the Culinary Arts training from Georgia Northwestern has taken Floyd around the world. Learning all about the foods, the recipes, and their preparations from many cultures has inspired Floyd in looking for his career path.

“We recently visited with the people at CalyRoad Creamery in Sandy Springs, Georgia,” said Floyd. “We made our own fresh mozzarella cheese and I really enjoyed that. And, when I got home that day, I made a homemade lasagna with the cheese.”

Floyd has many ideas for what he wants to do in the culinary world. The menu and the theme is still up in the air, but he is sure he wants to start his own chain of food trucks. “I’m thinking my trucks will offer customers my recipes of BBQ fused with French or Italian Cuisine,” said Floyd. “I have so many ideas right now. I'm still trying to find myself in what I want to specialize in. Another idea I was considering was an upscale breakfast. Something you would get from at a five-star restaurant, but from a food truck.”

Chef Cromer said Floyd also has extra things about him that will make him very special working in the culinary arts. “Things seem to click for him so dexterously, like tasting food to adjust for seasoning, knowing that it may need more or less of something even though that is what a recipe calls for,” said Kromer. “He also is great with his hands. He can fix just about anything. To be able to fix a dish machine, or a mixer, or work on some plumbing issue, he will be the full package when it comes to this business.”

When working with things such as pouring, mixing, and other kitchen procedures requiring use of his left hand, he has some help from a special device. “It’s a glove that forces my hand into an open position,” said Floyd. “The nerve damage from the crash doesn’t allow me to open my fingers together to grab. But, I can close my hand.” The neuropathy Floyd deals with each day can be painful, but you would never know just by looking at him.

“He works through the pain without complaint and he’s always in a pleasant mood” said Cromer. “He really impacts the rest of the class in a positive way. It’s really encouraging. It even makes me want to do better and better in my work each day.” Floyd currently lives in Rome, Georgia. He is currently engaged to his fiancée, Carmaneke Crawford. He has three children, Jelisa (16), DaMetrius (14), and Madysin (11).

For more information on Georgia Northwestern Technical College’s Culinary Arts program, you can call 866-983-4682. For information online, visit the college at GNTC.edu, as well as on GNTC’s Facebook, Twitter, Linkedin, Google+, WordPress, and YouTube channels. GNTC is a unit of the Technical College System of Georgia (TCSG) and an equal opportunity institute.