Earning its second national championship in as many years, the Georgia Northwestern Technical College SkillsUSA team has yet another title to add to its collection.

Just 24 months after the college struck gold for the very first time at the 2017 SkillsUSA National Championships, the Bobcats found the top of the medal stand once again. When the dust settled on the competition floor, GNTC’s TeamWorks squad would be standing high atop the podium in Louisville, Kentucky this past week.

A quartet of gold medals now hang around the necks of GNTC TeamWorks squad members Ryan Banks (Whitfield County), Jesse Flanagan (Polk County), Gabriel Lopez (Bartow County), and Joel Paez (Whitfield County). They are the winners of the national title in the construction-based category. TeamWorks is usually one of the most difficult areas to compete. This year was no exception with less than half of the national-qualifying teams even completing their projects.

“I am still trying to let it sink in that our GNTC team is the National Champ,” said GNTC Construction Management Director and SkillsUSA Advisor Donny Holmes. “These four guys worked harder than any team before.  They gelled together nicely as an actual team. If you can do that, that’s half the battle.” 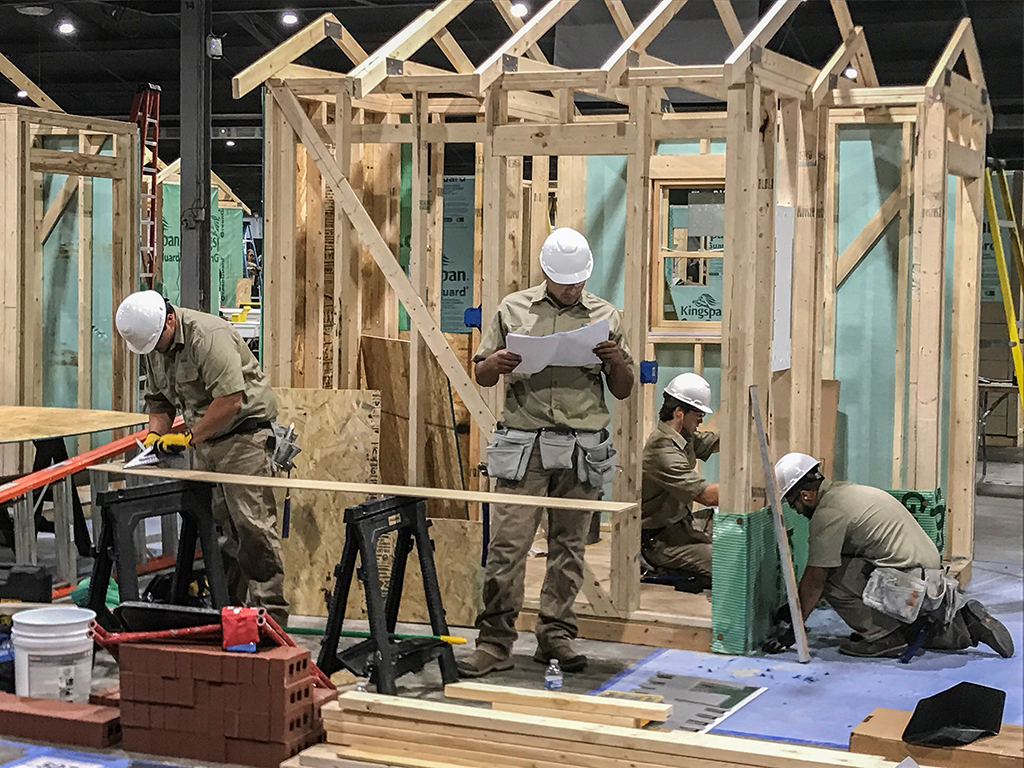 SkillsUSA defines the TeamWorks category as one in which teams of four students are required to build a construction project that will demonstrate their ability to work together. Over a two-day period, the teams must construct an 8x8 structure complete with masonry, electrical, plumbing, and carpentry details.

Holmes and his GNTC TeamWorks squads have been competing in SkillsUSA for the past four years. It was 2016 when the team became the first Georgia SkillsUSA crew to represent the Peach State at the national competition. The inaugural national qualifier won the bronze medal taking third in the U.S. that year.

“We are proudly building a culture of success,” said Holmes. “I promote it in the classroom. I explain to everyone what is expected and what the responsibilities are between practices, as well as the actual state and national competitions.  We have been doing this for a while now. Each year, I learn a little more that I can pass along to the next team. I’m just really proud of this team and their championship.”

GNTC’s first-ever gold was won in Welding by Cedartown, Georgia’s Ryan Fincher back in 2017. And now, after winning third in the China International Welding Competition 2018 (Beijing, China), Fincher will be headed to the 2019 World Skills Competition in Kazan, Russia this August.

“Each year, Georgia Northwestern has had excellent representation from our students and it is always exciting to have them be called to the stage,” said GNTC SkillsUSA Advisor, Missy Mclain. Gordon County, Georgia’s Kimberlee Hall earned the honor of walking up on the awards stage and would bring home national honors, as well. The GNTC nursing student won Bronze in the Practical Nursing category.

“As a college, we have never competed in the Practical Nursing competition,” said Mclain. “As a first-time competitor, Kimberlee represented us well at the state and national competitions.  She showcased the skills she has learned in the classroom and truly excelled in the competition.”

GNTC also took home a bronze last year when Chattooga County’s Taylor Eagle won third in the nation at the same competition in Louisville, Kentucky. Eagle received the honor for his work in the Residential Systems and Installation Maintenance category.

“Our national medalists compete against the best in the U.S. So, to be recognized on stage with a gold, silver, or bronze medal is a huge honor for our students, the advisors, the college, and the state of Georgia,” said Mclain. Other finalists for GNTC who competed in the national competition this week were Norberto Castaneda (Floyd County) - Industrial Control Motors, Brandon Neighbors (Catoosa County) - Automotive Service Technology, Cole Allen (Chattooga County) - Residential Systems, and Josh Barlow (Floyd County) - Medical Terminology.

Now, in its 55th year, the SkillsUSA National Competition saw more than 6,500 high school and collegiate qualifiers compete in front of nearly 1,500 judges in more than 100 categories ranging from Advertising Design to Welding and everything in between. SkillsUSA is a national, nonprofit student organization that has developed more than 10 million workers through active partnerships between employers and educators across the nation.

To learn more about the GNTC’s SkillsUSA program, or information on any of the more than 200 programs offered at GNTC, visit the college at GNTC.edu. You can also contact any one of GNTC’s six campus locations at 866-983-4682. GNTC offers classes online and on-campus at the Catoosa, Floyd, Gordon, Polk, Walker, and Whitfield Murray Campuses in Northwest Georgia.