Not knowing which way to turn in life is a very common feeling among most adults. Whether it is figuring out how to pay the bills or how to handle raising a child, 29-year-old Ashley Petty knows those struggles all too well.

But for Petty, not knowing which way to turn in life is more than just an expression. It’s a trial that has led to a triumph in earning her Commercial Truck Driving certification at Georgia Northwestern Technical College.

You see, Petty suffers from dyslexia. The disorder makes learning to read, write, interpret symbols, etc… much more difficult than it is for your average college student. It doesn’t affect a person’s intelligence, but it makes cracking the code of everyday life a puzzle all on its own.

“I have what is called directional dyslexia,” said Petty in an interview at the Georgia Northwestern Technical College Commercial Truck Driving facility in Walker County, Georgia. “I had a tough time being able to figure out directions in transportation. If an instructor told me to turn the wheel to the right or left, I really had a problem. I had to find a new way to learn.” 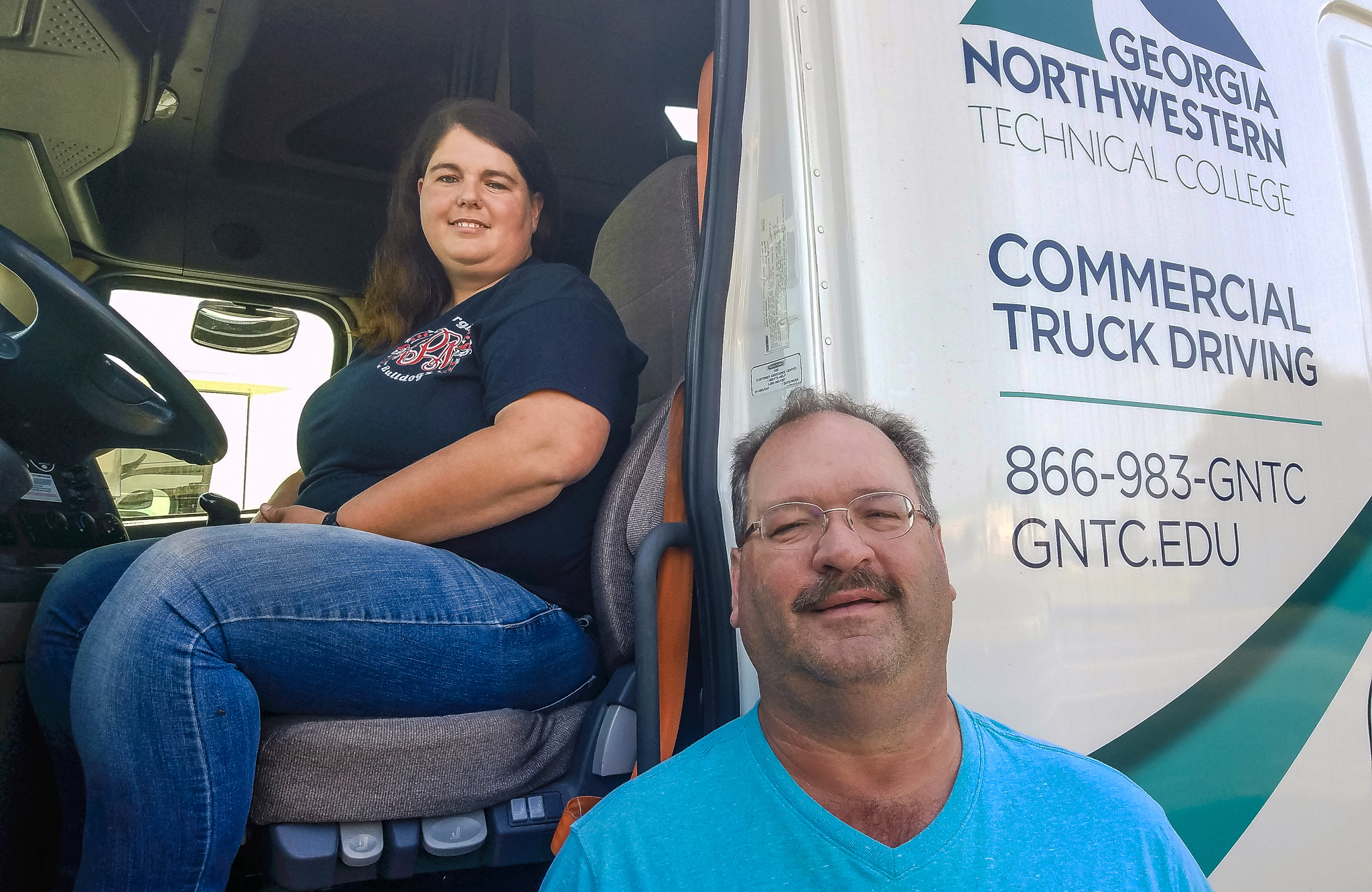 For anyone who has ever attempted to “back-up” a trailer of any size as it is hitched to a pulling vehicle, they know it is a difficult task. Now, Petty was previously a bus driver for a Georgia school system before coming to GNTC. “However, that’s a different thing altogether when you back-up a bus. It isn’t split in the middle,” said Georgia Northwestern Technical College Commercial Truck Driving Program Director Robert Browder. “Manipulating the tractor and the trailer at the same time requires concentration and precision. With Ashley’s dyslexia, she saw this as a major problem to overcome. But, we just realized it meant we simply needed to teach her a little differently.”

Commercial Truck Driving instructions will have drivers make left or right-hand turns, as well as have to back up their trailers in one direction or the other. “I spoke with our Disabilities Services specialists at the college and they helped us think of some great learning techniques,” said Browder. “When we want her to turn the wheel to the right, she immediately knows to turn towards the hand with the ring on it. She now wears a ring on her right hand to remind her. Now, her ring hand is her right hand. She turns towards the ring.”

There are other little short cuts that Petty has learned along the way thanks to her college instructor and her classmates. “I’ve battled dyslexia all my life,” said Petty. “Now, my 10-year-old, Sidney, also lives with it and battles it herself in her classroom, too. However, partly as a result of how I’ve had to learn the hard way, she is now really starting to perform well in school. We simply wouldn’t let her take the easy way out. A good school and patient teachers have made that adjustment an easier one for Sidney at her school and me at mine.”

Before settling down in Gordon County, Georgia, Petty and her daughter lived in Murphy, North Carolina. She says one of her daughter’s teachers in North Carolina really made the struggle hit home for her. “She had a teacher that told us that if she can’t learn it the way she’s teaching it, she’d never learn it,” said Petty. “I told her how that’s not true. Sometimes, you have to teach something a little differently for particular students. Not all students learn in the same way.”

“What we found was that Gordon County has plenty of teachers who have been learning to work with children with all kinds of learning disabilities,” said Petty. “As a result, she is now right at her grade level in areas she had previously been struggling with before coming to the new school.”

As a student of Tolbert Elementary, her daughter is getting care and instruction she personally never got to enjoy when she was young. With more than 700 students at Tolbert Elementary, it is nearly five times the size of her last school in North Carolina. “The school may be larger, but the teachers at Tolbert have really taken the time with Sidney to help her learn how to succeed academically.”

Now, Commercial Truck Driver-to-be Ashely Petty may have received similar care and instruction at Georgia Northwestern, however, when she was a child, life experience alone taught her quickly she would learn in her own way. Originally from Cobb County, Georgia, her biological parents separated when she was only four years old. Her mother would die four years later. She then bounced from group home to group home before ever having a chance of being adopted. From being a troubled teen and being relocated to state youth facilities to going through the adoption process at 13-years-old, Petty learned early that things were simply different for her. She learned that things would never come easy.

“My adopted mother noticed I had signs of dyslexia in high school,” said Petty. “I could figure out the answer to questions. However, I couldn’t prove it on paper. I was inverting numbers whenever I did math problems.”

A 2007 graduate of Fannin County High School in Blue Ridge, Georgia, Petty wasn’t sure what kind of career her future would hold. After graduation, she worked several different jobs, never really gaining any traction in any of them. So, after more than a decade of dealing with foster families, her troubled teen years, and a struggle just to survive high school and now life, she knew she didn’t want the same thing for her daughter.

“Now, while in college, I made myself work harder,” said Petty. “My boyfriend is a diesel mechanic. There were times where when he was working a commercial truck yard, I would come to visit and I would get the chance to get into the cab of a tractor-trailer. With me driving a stick-shift car, working a manual transmission in a tractor-trailer felt pretty natural to me.” Once she took her first drive around the truck yard, Petty was hooked.

Today, just one class away from having a two-year Associate’s Degree, Petty is looking to a brighter future for her and her little family. But, it’s a future that has roots in the past. It turns out after meeting her biological family over the past few years, she learned her biological grandfather was a truck driver. As well, several other members of her family had long-hauls down the highways on a regular basis, themselves.

Now in 2018, Petty is looking for close-to-home options for a commercial truck driving opportunity which will allow her to hit the open road. “I’ve spoken with some local companies just recently and hope to hear from them, soon,” said Petty. “But, I really need to be close to home for my girl. I’m proud of the opportunities I’m now facing, but I want to be able to help my daughter get a jump start on life that was almost impossible for me to have when I was young.”