The finalists were announced during a live streamed TCSG special presentation on Monday, May 10, at 1 p.m.

“GNTC is preparing me to meet my goals and has surpassed my every expectation. All of my courses are industry-related with a focus on gaining experience,” said Kuhrt, a student on the Floyd County Campus.

After graduating high school, Kuhrt received a scholarship to play basketball at Reinhardt University. During her time as a collegiate basketball player, she suffered an injury and had to withdraw from classes. Kuhrt said she had to face the reality that after two and a half years spent at college she would have to change course.

“I had no other option but to find a full-time job and find a school that would work around my schedule,” she said. “I was living in Gordon County at the time and wanted to give GNTC a try.” 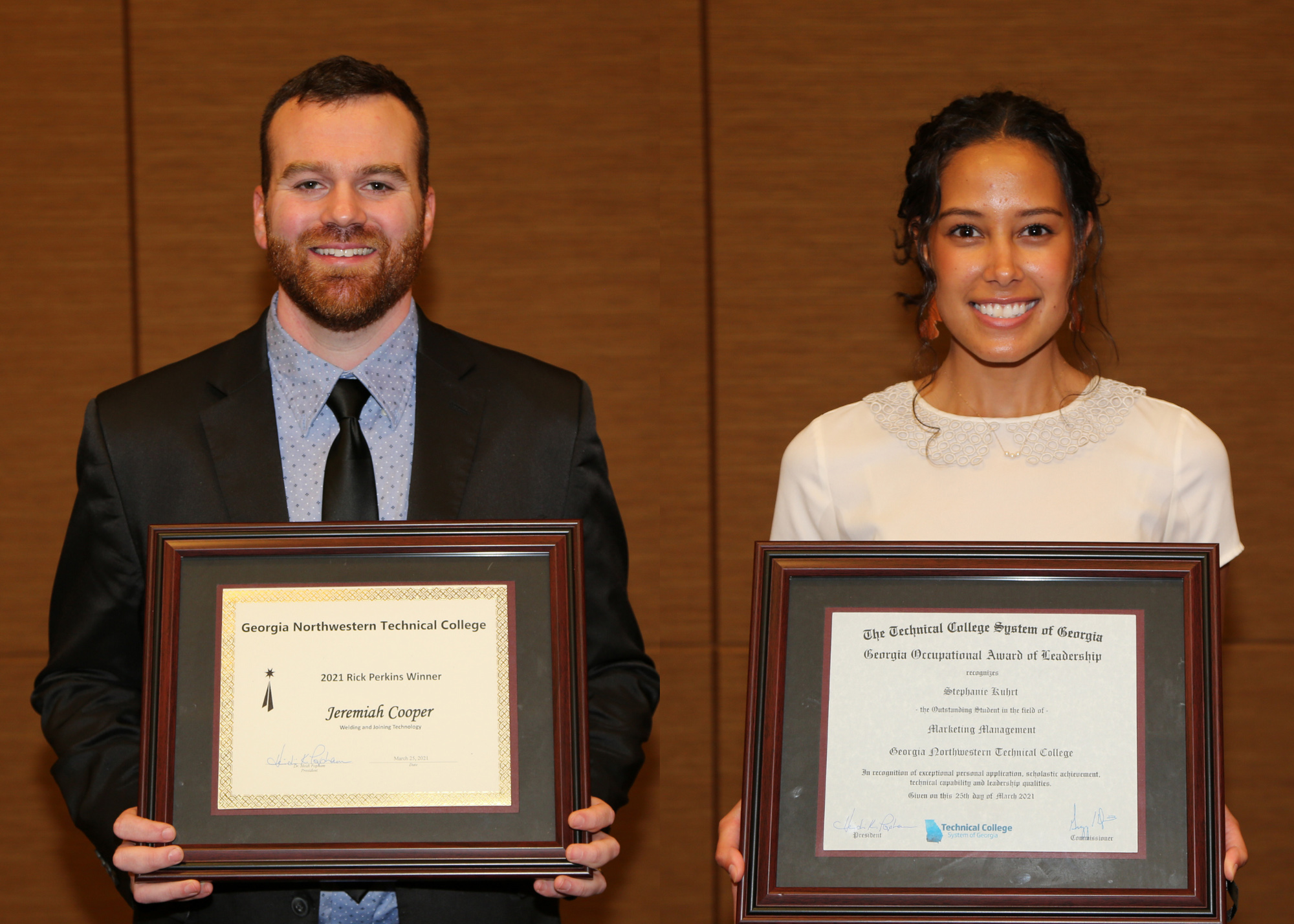 According to Kuhrt, her classes at GNTC gave her the vision and direction she needed to succeed in her career. Kuhrt and her boyfriend Jesse House own and operate Oostanaula Outdoors, a weed control and plant fertilization business. The GNTC GOAL winner also founded Fumi Co. LLC, a modeling and marketing agency that she runs on the side.

Kuhrt’s instructor Mark Upton, director and instructor of the Marking Management program at GNTC, nominated her in March.

“Stephanie is a diligent student. She is personable and has the drive and work ethic to succeed,” said Upton. “She excels in discussion forums with insightful engagement with her classmates.”

Jeremiah Cooper has been an instructor at GNTC since 2013. He is the program director and instructor of Welding and Joining Technology on the Walker County Campus. This is his second time serving as GNTC’s Rick Perkins Instructor of the year. Prior to joining Georgia Northwestern, he served as a welder and fabricator at Gentry Steel Inc. from 2012-13 and held the same position at Wilson Fabrication from 2009-12. He was also an instructor for Childcare Network from 2009-12. During his GNTC Rick Perkins acceptance speech in March, the GNTC welding instructor talked about his life since winning the award in 2017.

“My life has changed drastically in four years,” Cooper said.

The GNTC welding instructor told the audience that several months after he was chosen as GNTC’s 2017 Rick Perkins winner, his father was diagnosed with cancer. “From that point on things were very different,” he said.

On March 17, 2019, he described spending 10 uninterrupted minutes with his dad in a busy ICU room in Nashville. The father and son talked about a lot during that small window, but Cooper said he remembers one part in particular.

“He said to me ‘Son, after this is all over you’re going to have to pick yourself back up, dust yourself off and press forward because you have too many people relying on you,’” Cooper said. “’You have your wife, your mother, your siblings and you have your students.’”

A panel of leaders from business, industry and government will choose the Technical College System of Georgia’s GOAL and Rick Perkins Award winners for 2021 and recipient of the GOAL medallion. The Rick Perkins Award winner serves as an ambassador for technical education in Georgia. They will make many public appearances throughout the year, including addressing both chambers of the Georgia General Assembly.

The 2021 Student of the Year and state GOAL winner will serve as TCSG’s student ambassador during a number of system and college functions throughout the year. As the grand prize, a new automobile provided by Kia Motors Manufacturing Georgia will be awarded to the state GOAL winner.

Georgia Northwestern Technical College provides quality workforce education to the citizens of northwest Georgia. Students have the opportunity to earn an associate degree, diploma or a certificate in business, health, industrial or public service career paths. This past year, 11,820 people benefited from GNTC’s credit and noncredit programs. GNTC has an annual credit enrollment of 8,591 students and an additional enrollment of 3,229 people through adult education, continuing education, business and industry training and Georgia Quick Start. GNTC is a unit of the Technical College System of Georgia and an Equal Opportunity Institution.