Logistics of Life in the Spotlight

However, that’s not what has him smiling the most these days. The Dalton, Georgia resident is also a National Guard reservist, a husband of five years to his wife, Cortney, and now a soon-to-be college graduate. So, that’s plenty to be proud of and keep you smiling, right?

But none of that is what makes Jason and his wife, Cortney, the happiest. That honor lies in the miles of smiles their 21-month-old Lucas leaves in his wake each and every day. And, as of this spring, millions of people around the world know exactly why.

You see, the Gerber Products Company selected Lucas to be their 2018 Gerber Spokesbaby in an online contest earlier this year. As a result, Lucas is the first-ever special needs child to be selected for the honor. He was selected as the winner from more than 140,000 photos that were submitted for a chance at the distinction. 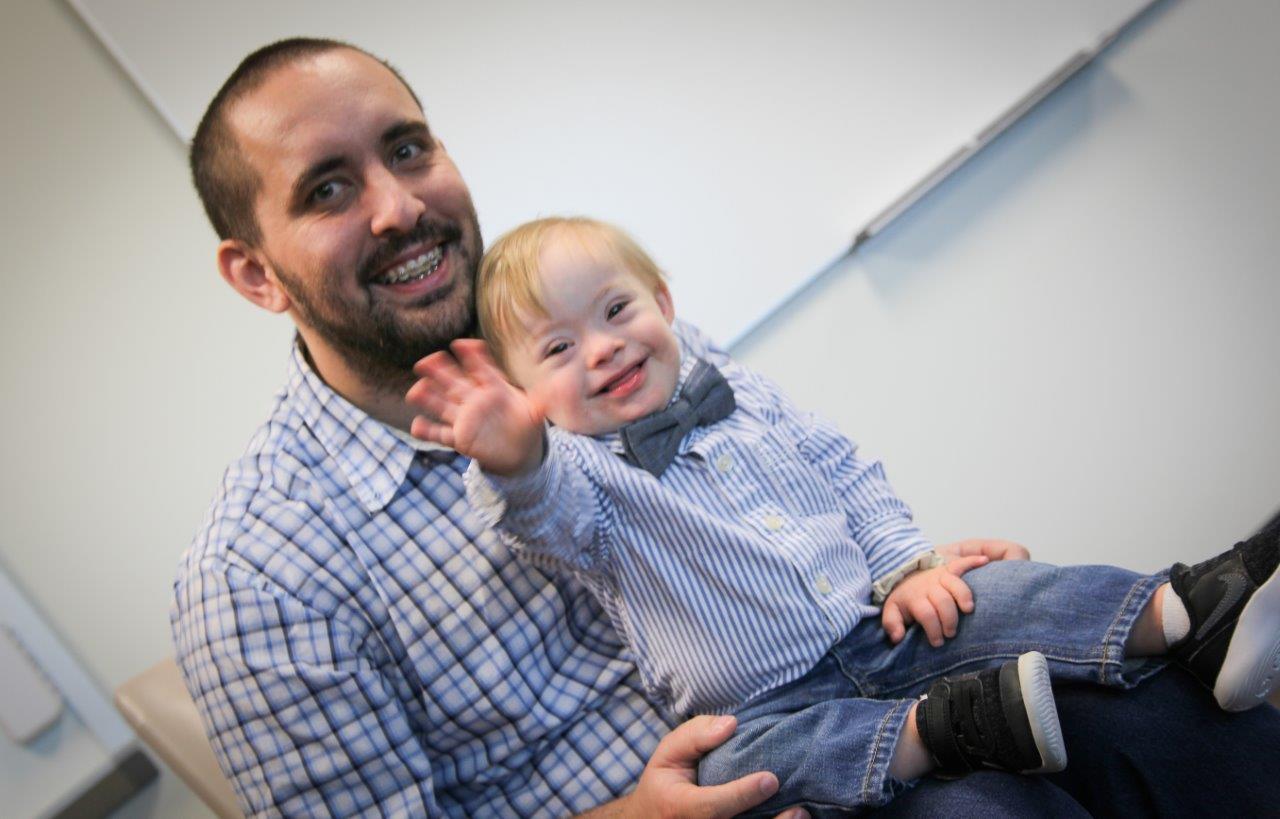 GNTC Logistics and Supply Chain Management student Jason Warren poses with his son, Lucas Warren in a Logistics and Supply Chain Management classroom on the Catoosa County Campus. Lucas is the 2018 Gerber Spokesbaby as selected by the Gerber Products Company. More than 140,000 photos were submitted by families nominating their children for a chance to be named the Gerber Spokesbaby of the Year.

The original Gerber Spokesbaby, which still graces the covers of Gerber products worldwide, is Ann Turner Cook. Cook, now 91 years old, spent most of her life as a school teacher in Florida. Being able to successfully make it through his school years is The Warren Family’s hope for Lucas.

“As a father, seeing your child succeed in life and go to school, that’s what I’m looking forward to,” said Jason in a NBC Today show interview announcing Gerber’s selection of Lucas. Of course, Jason is now getting the opportunity to lead by example for his child who lives with Down Syndrome.

Long before Lucas came along, Jason faced his own struggles. Jason attempted to enroll in college just after his graduation from Ringgold High School in 2009. “I went to another college in the area and ended up having to drop out to help my family,” said Jason. “I guess I just needed to wait for the right time.”

The right time was 2016. Jason was driving tractor-trailers for a living. “With the job taking me all over the United States and Canada, it kept me away from home a lot,” said Jason. “I was looking all over for colleges teaching logistics, given it was a logical step from driving a tractor-trailer, when some of my friends said that it was offered right here at home at GNTC.”

At the time, Jason and Cortney Warren had been married for just three years. Lucas was still half a year away from coming into the world. That’s when Jason would meet Ms. Grace Beam, Director of the Logistics and Supply Chain Management program on the Catoosa County Campus of GNTC. “Jason was one of our first students in this fairly new program,” said Beam. “From the start, I could tell he was really cut out for this kind of career.”

After he graduates from GNTC with an Associate of Applied Science Degree in Logistics and Supply Chain Management, Jason says he will consider continuing his education through Georgia Military College. “They offer a Bachelor’s Degree in my field,” said Jason. “It may have to wait until after next year, though.” Jason may face a military deployment by way of his National Guard commitment in 2019. He’s expected to graduate from GNTC in December.

As for Jason’s wife, her educational goals are inspired by her communication efforts with their only child. Cortney is looking into possible programs that would help her with learning American Sign Language. “Lucas knows a few words by sign language right now,” proudly added Cortney. “We do some signing with him. Like, he knows how to say mommy and daddy in sign language. I just want to be ready to help him.”

But, what about Lucas? What does their soon-to-be two-year-old want to be when he grows up? “Well, he has a little toy screwdriver he carries around and he loves to wear bowties,” said Cortney. “I’m pretty sure he thinks he’s pretending to be a doctor.”

When Lucas isn’t sporting his winning smile, he can actually say a few words. “He’s been saying ‘dada’ and trying to say ‘momma’,” said Cortney. “He tries to say what sounds like the names of our dogs, ‘Abby Dog’ and ‘Lady’.” Lucas also loves to cheer on the Georgia Bulldogs when his daddy starts to cheer, “Gooooooo Dawgs!” Lucas tries to reply with a very happy, “Woof, woof, woof.”

Although it seems Jason, Cortney, and Lucas appear to be headed to bigger and brighter things these days, it was less than two years ago that they weren’t sure what the rest of their lives would be like. “We didn’t find out he had Down Syndrome until after his birth,” said Cortney. “The day he was born the doctors told us he had a couple of holes in his heart and that he also may have Down.” That diagnosis would be confirmed two weeks later.

The Warren’s will tell you today that their biggest worry was always how would people treat their child. “I was always afraid he’d be bullied or people would be scared of him,” said Cortney. “But we’ve learned so much from Lucas. We learn more from him than he does from us. In the end, Lucas really wins people over wherever we go.”

After travelling to New York City for everything from television interviews to photo shoots due to their newly-found fame, the world truly has been won over by Lucas. “It’s been hectic, but so special,” said Jason. “There are places all over the world still writing articles about Lucas and his being named the Gerber Baby. It’s just went viral. We’ve been contacted by people from around the world. Usually, it’s parents of special needs kids just scared because they weren’t sure what things awaited their special children in the future. Then, they saw Lucas’ story and saw how brave he has been and it gives them hope to bring their kids out into the world, too.”

If you ever get the pleasure to spend time with Lucas Warren and people ask you what he is like, you’ll have lots to say. You’ll say he’s outgoing, he loves to laugh and to smile, he really likes to play, and he enjoys eating chicken and his Gerber pouches of Apple, Kale, and Fig. “He’s your typical toddler,” says Jason. But the one thing you’ll almost forget to mention, because of the way Lucas wins you over, is that he has Downs Syndrome.

“He’s going to be really excited because he is having a superhero-theme birthday party this summer,” said Jason.

Well, Warren Family, on behalf of anyone who has met Lucas, we’re pretty sure we already know who the true superhero is.