Georgia Northwestern Technical College (GNTC) alumnus and SkillsUSA World Team Welder Ryan Fincher will be traveling to Germany as part of his preparation to represent the nation at the WorldSkills Welding Competition in Russia.

Fincher will take part in “Specialized Competitor Training for WorldSkills Kazan 2019,” from April 29 to May 3 in Eisenberg, Germany. He will train with other WorldSkills welders who are representatives of their home countries.

According to Fincher, the training in Germany is meant to not only help the international welding competitors get prepared for the WorldSkills Welding Competition, it will also be a chance for the welders to get to know one another before they go to Russia. 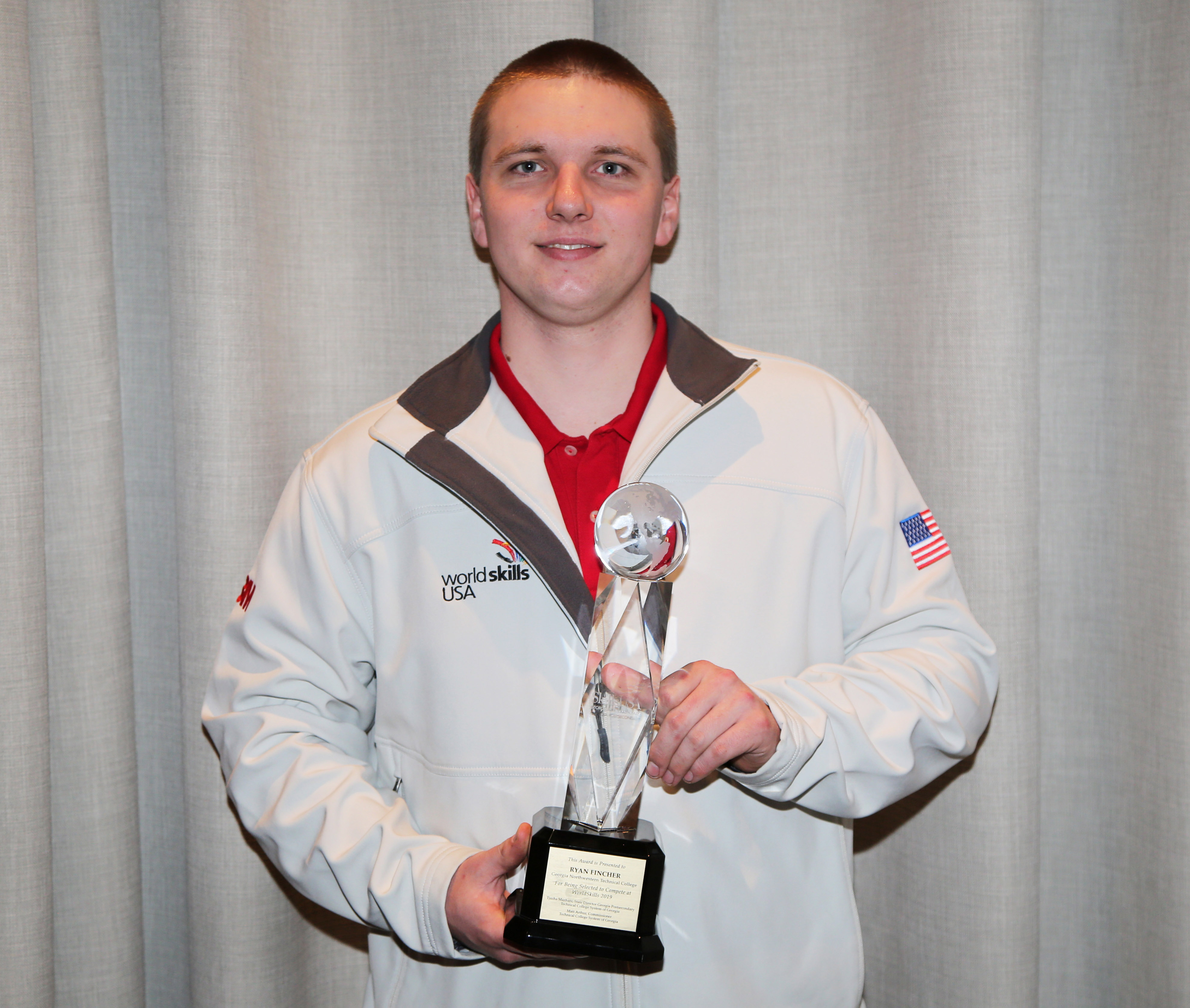 GNTC alumnus Ryan Fincher of Cedartown poses for a picture with the trophy awarded to him at a special presentation during the opening ceremony for SkillsUSA Georgia in March. Fincher was recognized for being selected as the SkillsUSA World Team Welder to represent the county at the WorldSkills Welding Competition in Kazan, Russia.

“All of the WorldSkills competitors that I have met so far have been really great people,” said Fincher, a resident of Cedartown. “The most interesting thing has been that different countries use different methods to get the same end product.”

Fincher was chosen to be the U.S. representative at an awards program hosted by the American Welding Society (AWS) in February.

As the SkillsUSA World Team Welder, Fincher will receive a $40,000 scholarship in addition to representing the nation against the best WorldSkills welders from other countries.

“Ryan is the first person in the State of Georgia to become the SkillsUSA World Team Welder,” said Matt Hayden, instructor of Welding and Joining Technology at GNTC.

Hayden is also an instructor of Metals and Welding at Cedartown High School/Polk County College and Career Academy and has been coaching Fincher since he was high a school student.

Fincher is currently working as a part-time lab assistant in the Welding and Joining program at GNTC and has been practicing and preparing full-time for the international competition. Fincher practices at GNTC’s welding labs and the welding labs at the Polk County College and Career Academy.

Fincher already has experience in international welding competitions. This past summer, he was selected by the AWS to be the American representative in the China International Welding Competition 2018 in Beijing and won the bronze medal. There were representatives from China, Mongolia, Korea, Russia, Australia, and other countries at the competition in Beijing.

He will return to China for additional WorldSkills training. Fincher and other WorldSkills welders will travel to Gansu, China on May 27 to prepare for the competition in Russia.

“I will also go to a three week training session in St. Louis and spend a month in Utah preparing for WorldSkills,” said Fincher. “Life has been very exciting for the past year to say the least.”