Leyner Argueta, program director of Business Management at Georgia Northwestern Technical College (GNTC), was named the 2019 Rick Perkins Instructor of the Year for the Technical College System of Georgia during a banquet honoring the system’s most outstanding instructors and students at the Grand Hyatt in Atlanta on Wednesday, April 17.

As the 2019 Rick Perkins Award winner, Argueta received a $1,000 cash prize and will serve as an ambassador for technical education in Georgia. He will make many public appearances throughout the year, including addressing both chambers of the Georgia General Assembly.

An instructor at Georgia Northwestern since 2015, Argueta teaches Management and Supervisory Development on the Whitfield Murray Campus in Dalton. He is a resident of Calhoun and is bilingual in English and Spanish. 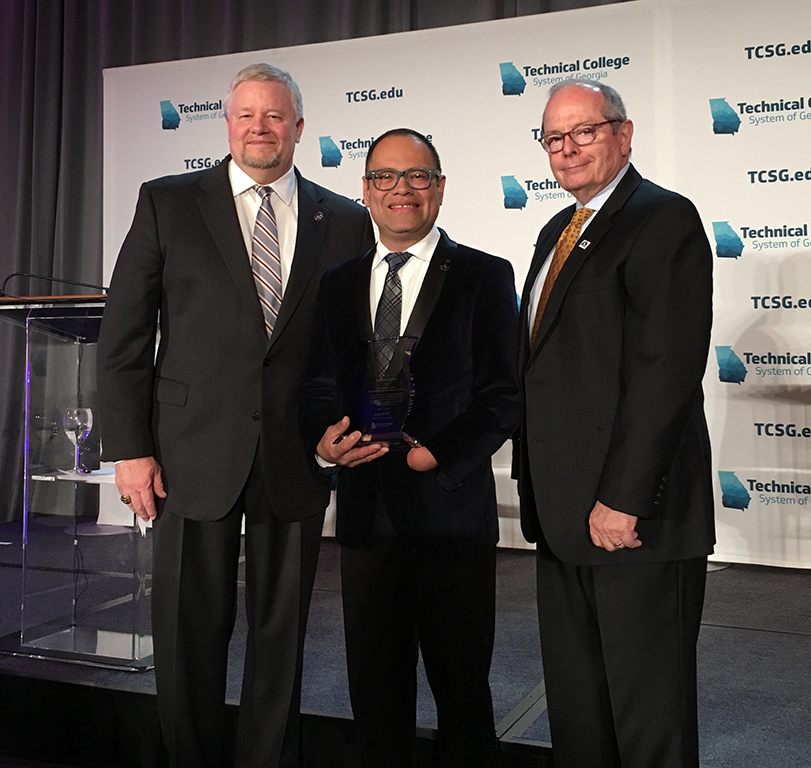 GNTC’s Leyner Argueta (center) was named the 2019 Instructor of the Year for the Technical College System of Georgia. Also pictured is TCSG Commissioner Matt Arthur (left) and Pete McDonald, president of GNTC.

Prior to becoming a resident of Georgia, Argueta was a government sales account manager for CDW in Chicago. In this role he oversaw the logistics of all international sales, which included negotiating a multimillion dollar contract with the Department of Education of the Virgin Islands.

He was a senior real estate agent for JMAC Real Estate in Chicago, 2004-07; sales manager for D&K International in Elk Grove, Illinois, 1998-2003; and managing partner of golf manufacturing and distribution for Argado Inc. in Chicago, 1998-2000.

“I would wake up at 3 a.m. to go to a 4 hour dialysis treatment and then go work at a full-time job,” said Argueta. “After work, I would rush to make it to my English 1101 class. That sure wasn't a walk in the park.”

An active member of the community in Calhoun, he has served as vice chair of the Governing Team at Red Bud Middle School, 2014 to present; chairperson for the Board of Directors of Voluntary Action Center, 2010-16; and Governing Counsel at Red Bud Elementary School, 2011-14.

The last Rick Perkins Instructor of the Year winner to represent GNTC was Troy Peco, director of Automotive Technology, in 2013.