Georgia Northwestern Technical College (GNTC) Culinary Arts students had a chance to work directly with a renowned Irish Chef from Monday, March 12, to Friday, March 16, as part of an ongoing international partnership between the Waterford Institute of Technology (WIT) in Ireland and the Technical College System of Georgia (TCSG).

Four Irish chefs from WIT were assigned to four different technical colleges for the week to train students and faculty how to prepare traditional Irish cuisine. All four colleges ended the week with a gala reception and dinner in celebration of St. Patrick’s Day. The three other colleges that participated were Albany Technical College, Columbus Technical College, and North Georgia Technical College. 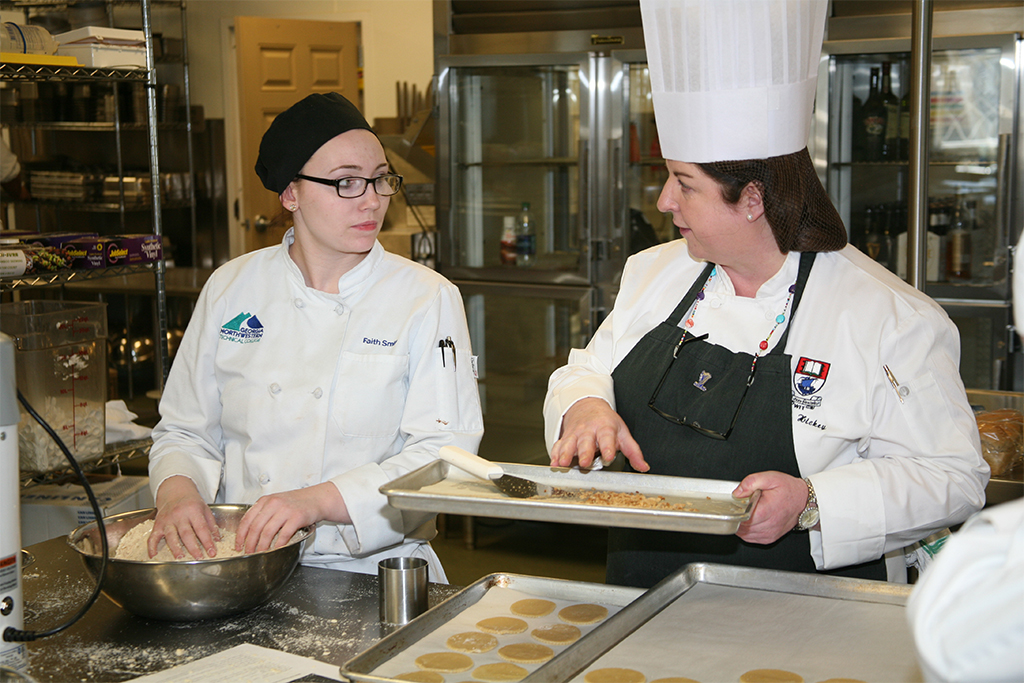 Faith Smith (left) of Calhoun and Chef Judith Hickey (right), of the Waterford Institute of Technology in Ireland, prepare the desserts for the “Taste of Ireland” reception and dinner.

“I have been having great fun with the students,” said Hickey. “We have actually learned a lot from each other.”

Hickey began her culinary career more than 30 years ago. She has a degree in Pastry and Confectionary, a diploma in Management from the Irish Management Institute, and a master’s in Adult Education. Hickey has lectured at WIT for several years on various Culinary Arts and Hospitality Management programs including culinary skills and operations, food safety, nutrition, and food security and sustainability. WIT is in Waterford, Ireland, just outside of Dublin.

Prior to her career at WIT, Hickey has 12 years’ experience working for Fáite Ireland, the Irish Tourism Authority, in its training division as a Culinary Arts lecturer. During that time, she was also involved in the design and evaluation of training programs as an external examiner for the Education and Training Board.

The relationship between WIT and the Technical College System of Georgia began in 2012 when the International Affairs division of TCSG began collaborating with WIT on several projects.

In 2016 a group of GNTC Culinary Arts students studied abroad at the Waterford Institute of Technology. The ten-day course “Irish Food and Culture,” was a culinary seminar on the preparation of Irish Cuisine. Ten students took part in the course which also included field trips to various markets, restaurants, butcheries, fromage (cheese) shops, famous landmarks, castles, and beaches. Georgia Northwestern was the first college in the Technical College System of Georgia to take part in the international agreement between the Waterford Institute of Technology and the TCSG.

Hickey was one of the WIT chefs that presented to the GNTC students that went to Ireland in 2016.

“My background is in pastry so I went through a lot of different desserts with them,” said Hickey. “They also got to see the social life in Ireland and what it is like to live in Ireland as well.”

During her visit to GNTC and Rome, Hickey had a very busy itinerary which included meals at several Rome-area restaurants with chefs that are GNTC Culinary Arts graduates. She also was given a tour of the research and development department of Southeastern Mills by R&D Chef Jordan Evans, a graduate of GNTC.

“I have eaten in so many restaurants here in Rome and the food is exceptional,” said Hickey. “The traditional Southern cooking has really been brilliant and the chefs have been great.”