A New World: The Education of Nikita Kovalevskiy

Nikita Kovalevskiy is half a planet away from his homeland, Kazakhstan. The world’s largest landlocked nation is home to more than 17 million people. That’s about 16,930,000 more people than where he now calls home: Walker County, Georgia. What’s more amazing is how this Georgia Northwestern Technical College (GNTC) student ended up in the United States.

Today, “Nikita’s” homeland is under the microscope for everything from controversial religious laws to human rights violations. But since leaving the old Soviet republic, Nikita has spent the past eight years in a new land, more than 10,000 miles away from Auliekol, Kazakhstan, his birthplace.  Major changes may be on the way in the old country, but this 26-year-old Industrial Electrician student at GNTC is making his own changes towards a better life right here in the Peach State. 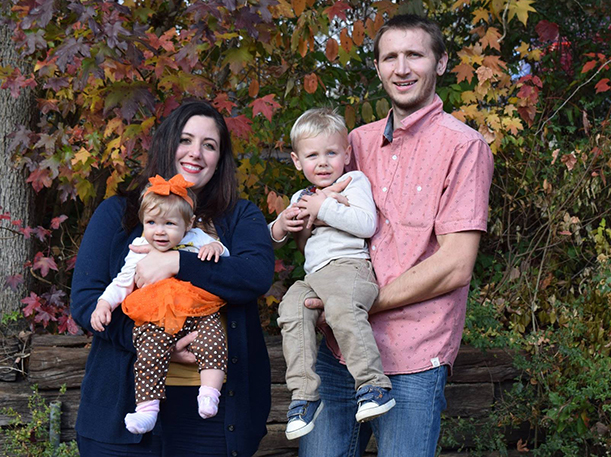 Nikita Kovalevskiy’s young family posing for a picture in Walker County, Georgia. Shown here are Nikita and his wife, Chelsea, and their children Anna and Nikolai

For the past seven years, Nikita has worked for Shaw Industries Plant 67 in LaFayette, Georgia. Currently, Nikita is a machine operator for the flooring giant. And now, with several years under his belt with Shaw, he hopes to go after his next career within his plant. “I decided to enroll at the Catoosa County Campus in Ringgold,” said Nikita. “They have an Industrial Electrician certificate I want to earn. It will help me have a chance to advance. Whatever it takes to make things better, that’s what I’m going to do.”

The Catoosa County Campus of Georgia Northwestern opened its doors to students officially for the Fall 2016 semester. The Ringgold, Georgia site is the college’s sixth campus in operation in Northwest Georgia. The other campuses are located in Floyd, Gordon, Polk, Walker, and Whitfield County, Georgia.

Industrial Systems Technology instructor Matthew Sosebee teaches the coursework for Nikita and all of those attending the Catoosa County Campus for work within the Industrial Systems Technology program. “Mr. Sosebee is a pretty good teacher,” said Nikita. “He is really good at explaining what we need to learn. If there is anything you don’t know about the material, he is really helpful and makes sure you understand.”

Understanding one another is what Nikita can vouch for, first-hand. “When we first met in Kazakhstan, I was trying to teach her Russian,” said Nikita of his California-native wife. “She was there working with the Peace Corps when we first met. I was just 19 at the time. But, we became good friends and got to know each other.”

In 2009, he made the decision to pack his things and head to a new place. One that would ultimately give him a new lease on life. It would be in LaFayette, Georgia that Nikita and Chelsea would become husband and wife. The two would begin their young family in 2013 when their son, Nikolai, was born. Then, their daughter, Anna, came along two years later.

Nikita was still a toddler himself when Kazakhstan declared its independence from the now disbanded Soviet Union. As a youngster who grew up just a couple of hours from Russia, Nikita and his friends had plenty of dreams.

“I remember wanting to play professional basketball when I grew up,” said Nikita. “Your dreams change as you get older. I’m looking forward to what’s next after I finish college. But, I do miss some things from back home from time to time.” Among the things he misses, Nikita says one of his mother’s recipes is near the top of the list. Among the dishes he listed was his mother’s Shashlik. The closest relative to it on the American Menu is a Shish Kebab; a skewer of grilled lamb, pork, or beef. Nikita still speaks with his family back home a couple of times each week.

Not so long ago, this 20-something father of two had once hoped for an opportunity just like the one he has in front of him today. One that would allow him to make his mark in the world. From one young Peace Corps worker learning the language of her future husband, to an industrial technology instructor making sure a student from overseas is prepared better than ever for his future, Nikita Kovalevksiy and his family truly “understand” what it takes to make a dream come true.

For more information on Georgia Northwestern Technical College’s Industrial Systems Technology program, you can call 866-983-4682. For information online, visit the college at GNTC.edu, as well as on GNTC’s Facebook, Twitter, Linkedin, Google+, WordPress, and YouTube channels. GNTC is a unit of the Technical College System of Georgia (TCSG) and an equal opportunity institute.

Since 1962, Georgia Northwestern Technical College has provided degrees, diplomas, and certificates in business, health, industrial, or public service career paths. This past year, 13,734 people benefited from GNTC’s credit and noncredit programs. With an annual credit enrollment of 7,876 students, GNTC is the largest college in Northwest Georgia. GNTC has an additional enrollment of 5,858 people through adult education, continuing education, business and industry training, and Georgia Quick Start.