We are proud to announce Eric Hamilton as our January 2021 Little Bundle Superdad Scholarship winner in the college category! We are honored to celebrate the hard work and dedication of single dads who can often be overlooked for all that they do.

Eric will tell you he hasn’t always made the best choices in life but one thing he’s adamant about is being the best dad he can for his four-year-old son Charles.

His father didn’t give him much of a role model — he was a drug addict and dealer. Eric’s older brother was more of a father to him and they had a connection with each other through wrestling, judo, and jujitsu. Eric even used to be a MMA instructor and his son loves going up to his brother’s gym.

With plenty of ups and downs, Eric has seen his share of significant transitions — a knee injury that prevented him from going into the Marines, debt, marriage, becoming a father, then divorce with split custody of his son. Regardless, doing better to provide for his son has been the biggest motivator for his successes. He currently has a 4.0 GPA while pursuing an Associate's Degree in Applied Technical Management with a Diploma in Welding and Joining Technology and owns a pressure-washing business. His goal is to eventually buy a home and own a fabrication company. 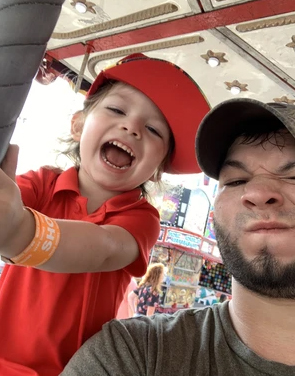 Eric was overjoyed telling us about the birth of his son. “That was probably the most proud and happiest moment of my life,” he said. “I watched my son walk for the first time. Even being able to watch my son when he potty-trained. He’s four years old now and I still make sure I’m always there. Everytime there is a first time, I always try to be there.”

Eric said the scholarship money will relieve a lot of his stresses and allow him to work less overtime so he can spend more time with his son. Between classes, tutoring, side jobs, and his small business, his time is limited, and he always wants to ensure he’s a present father.

“I am working very hard to be successful in school. I was not always the best student, but I want to do well through this program,” he said. “I am making efforts and putting in time I never did before for school. I am doing all of this because I want to be the best father I can be to Charles and show him that hard work and determination can help you accomplish anything.”