Harper received word that she earned the Helicopter Association International Women in Aviation International (HAI/WAI) Maintenance Technician Certificate Scholarship in early February. The AMT student said the award is a relief as she continues her career transition from accounting to aviation repair.

The 41-year-old has spent most of her career in an office doing accounting work, until one day she decided it was time for a change.

“I have always loved looking at planes,” Harper said. “There was a US Air Force base behind my house as a kid and I would just sit and watch the planes in the sky.”

The aviation maintenance student discovered the field of aircraft repair in June of 2019 through a Delta Airlines mechanic who lived next to her sister. Steve Barding, who just celebrated his 30th work anniversary at Delta, showed Harper how to replace landing gear parts on his personal plane and brought her along on a few flights.

“I had never done anything like that before, so it was a bit of a challenge,” she said. “It turns out it was something I really enjoyed doing.”

Later that year, Harper found a job at a Federal Aviation Administration (FAA) certified repair station in Thomaston, Ga. She began spending her days using a grinder to remove corrosion from airplane parts, a big change from crunching numbers.

“The station manager said he would hire this career accountant to work in his hangar,” she said laughing. “I was having fun even though it was still really new to me.” 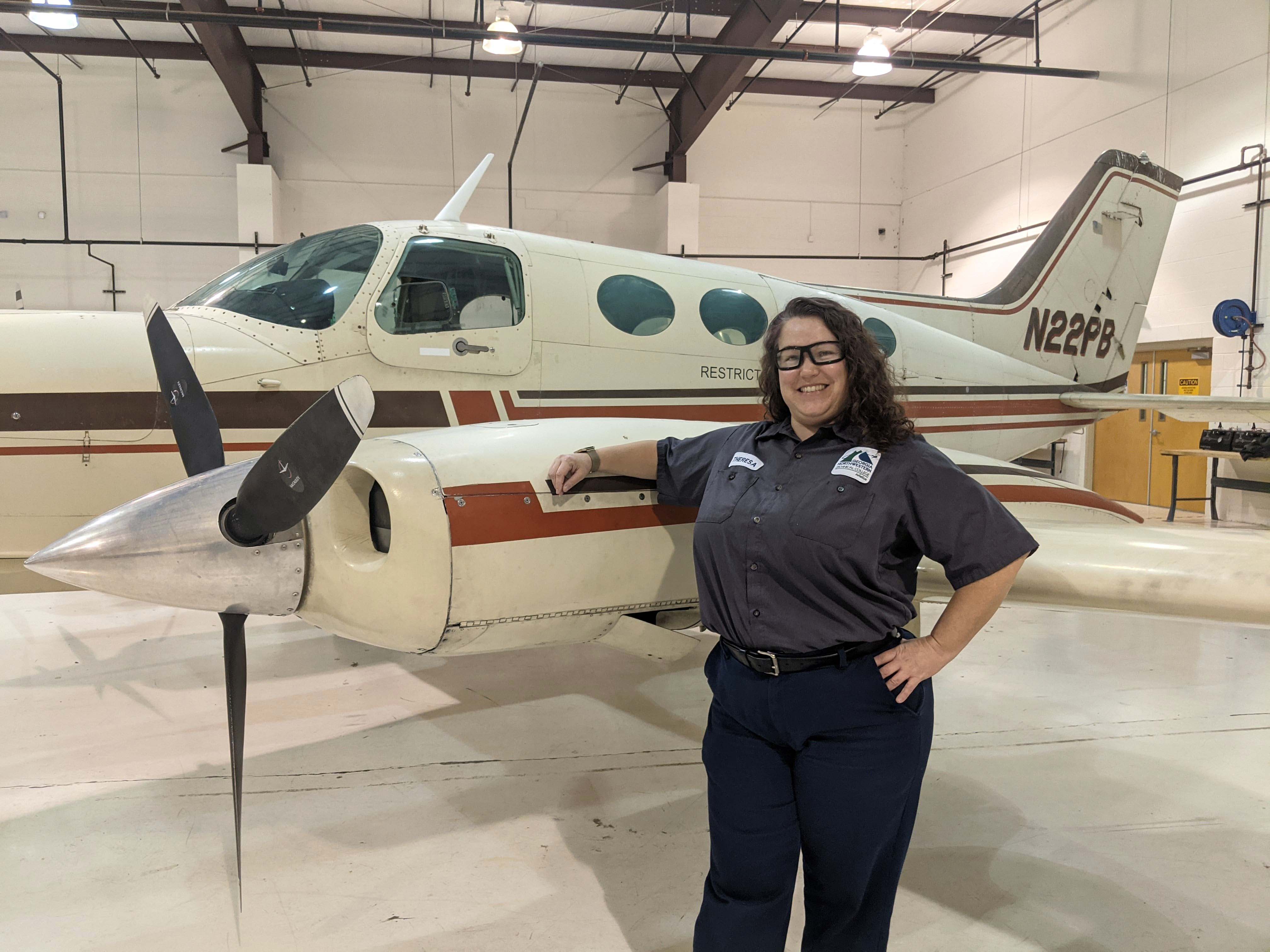 GNTC student Theresa Harper stands next to a plane in the GNTC Aviation Training Center hangar. Harper is the recipient of the HAI/WAI Maintenance Technician Certificate Scholarship and will receive recognition at the 32nd Annual International Women in Aviation Conference in March.

During her time working at the repair station, Harper began to consider making a career change from accounting to aviation maintenance and began looking into programs around the state. After driving to Marietta, she made the trip to GNTC to get more information on the program.

“I drove to Rome on a hunch and now I am at the best aviation school in the state,” Harper said. “I am in class full-time and while I do a few side gigs school is my life.”

The AMT student said she loves using tools and troubleshooting repairs in the GNTC Aviation Training Center labs. She has to do a little extra studying to make sure she stays on track, but considers herself fortunate to be able to focus solely on her technical training. After graduation, she hopes to get her pilot’s license and start a full-time career repairing aircraft.

“Theresa is a great student and is showing signs of being on-track for a very successful career in aircraft maintenance,” said Jon Byrd, director of Aviation Maintenance Technology at GNTC. “Theresa and her classmates are on track to meet their eligibility for the FAA Mechanic Certificate and Airframe Rating before the end of fall semester later this year.”

“What a lot of students don’t understand is scholarship money is out there and in some cases it goes unclaimed,” he said. “I am thrilled Theresa and Stephanie took the time to seek out the WAI scholarships and received recognition for their hard work.”

“WAI scholarships have helped thousands of girls and women take significant steps toward making their aviation dreams a reality,” said McKay. “The scope of scholarships available spans all the aviation specialties, with awards available for WAI members of all ages and stages of life. We know that scholarships change lives, and we are thrilled to support more than 100 winners in WAI2021.”

Georgia Northwestern Technical College provides quality workforce education to the citizens of Northwest Georgia. Students have the opportunity to earn an associate degree, diploma or a certificate in business, health, industrial or public service career paths. This past year, 11,820 people benefited from GNTC’s credit and noncredit programs. GNTC has an annual credit enrollment of 8,591 students and an additional enrollment of 3,229 people through adult education, continuing education, business and industry training and Georgia Quick Start. GNTC is a unit of the Technical College System of Georgia and an Equal Opportunity Institution.