Emily Connell, a resident of Ringgold who was chosen in December to represent Georgia Northwestern at the EAGLE Leadership Institute, was also recognized during the banquet. The Leadership Institute recognizes and honors those students who have demonstrated superior achievement in adult education classes and programs.

Ramirez, GNTC’s GOAL winner, is a student at the Floyd County Campus and was nominated by his instructor, Gerald McFry, director of the Business Management program.

“Miguel always worked hard and excelled at everything he was involved in,” said McFry. “He has never made anything less than an A in every class he has taken.”

He was selected from a group of four semi-finalists for his presentation on technical education by a panel of judges representing business, industry, and higher education in the Northwest Georgia region. 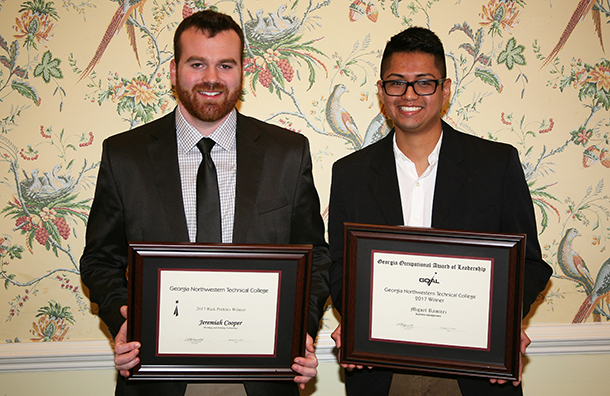 Ramirez is currently an Appliance Performer Instructor at Lowes, Inc., and received the Platinum Performer Award from Lowes in 2016. He has volunteered for the Human Rights Campaign, 2015-16, and for Keep Rivers Alive, 2008-09. He was also member of Kiwanis Club, Polk Youth Leadership, Beta Club, Keep Polk Beautiful, and the National Honor Society.

During his junior year in high school, Ramirez had to drop out due to unexpected family events. He obtained his GED© diploma from Georgia Northwestern and went on to attend college at the Floyd County Campus.

“The benefits of attending a technical college are one of the reasons I decided to go back to school,” said Ramirez. “Technical college allows people to be prepared to enter the workforce without running up a lot of student debt.”

Ramirez has made the President’s List each semester at GNTC and has a 4.0 GPA. He works full time and goes to college full time.

“I had economic and personal obstacles that made me put a halt on my dreams of attending college,” said Ramirez. “Thankfully, we have technical colleges that have been designed to turn people’s dream into a reality.”

As the 2017 GOAL Winner for Georgia Northwestern, Ramirez will move to the regional competition and if chosen as a regional winner, he will compete at the state level against winners from the other regions of Georgia. He will receive an all-expense-paid trip to Atlanta. A panel of leaders from business, industry, and government will choose the Technical College System of Georgia’s (TCSG) GOAL winner for 2017 and recipient of the GOAL medallion. The 2017 Student of the Year and state GOAL winner will serve as TCSG’s student ambassador during a number of system and college functions throughout the year.

Jeremiah Cooper, instructor of Welding and Joining Technology on the Walker County Campus, was selected as GNTC’s 2017 Rick Perkins Instructor of the Year.

Cooper was chosen for his outstanding presentation about the value of technical education.

Related Video: The Rick Perkins Instructor of the Year at GNTC

“Since my first day as a welding instructor at GNTC, I’ve been convinced that this is what I was put on earth to do,” said Cooper. “I wanted to be able to help people and to witness the evolution of a student in their pursuit of a career.”

“I’ve been here for 3 years as of January 1st and in that time we have documented over 70 former students working in the industry,” said Cooper. “That’s how we gauge our success as a program.”

Cooper is a member of SkillsUSA, the Youth Success Academy, Department of Labor, and the American Welding Society.

As GNTC’s Rick Perkins Instructor of the Year, Cooper will compete in the regional competition. If chosen as a regional winner, he will compete at the state level in the competition. A panel of leaders from business, industry, and government will choose one instructor to be the 2017 Technical College System of Georgia’s Rick Perkins Instructor of the Year. The winner will receive a $1,000 cash prize.

The Rick Perkins Award winner serves as an ambassador for technical education in Georgia. He or she will make many public appearances throughout the year. The last state winner to represent GNTC was 2013 Rick Perkin’s winner, Troy Peco, director of the Automotive Technology program.

Georgia Northwestern Technical College provides quality workforce education to the citizens of Northwest Georgia. Students have the opportunity to earn an associate degree, diploma, or a certificate in business, health, industrial, or public service career paths. This past year, 13,734 people benefited from GNTC’s credit and noncredit programs. With an annual credit enrollment of 7,876 students, GNTC is the largest college in Northwest Georgia. GNTC has an additional enrollment of 5,858 people through adult education, continuing education, business and industry training, and Georgia Quick Start.