The winners were named during a reception at GNTC’s Floyd County Campus in Rome on Friday, Feb. 1. The awards were sponsored by the Rome Floyd Chamber, the Seven Hills Rotary Club of Rome and GNTC.

“Technical education has allowed me to take the first steps toward fulfilling my dream of one day owning my own business,” said Neighbors, a resident of Ringgold. “It is equipping me with the knowledge and skills necessary to be successful in the Automotive Technology field.” 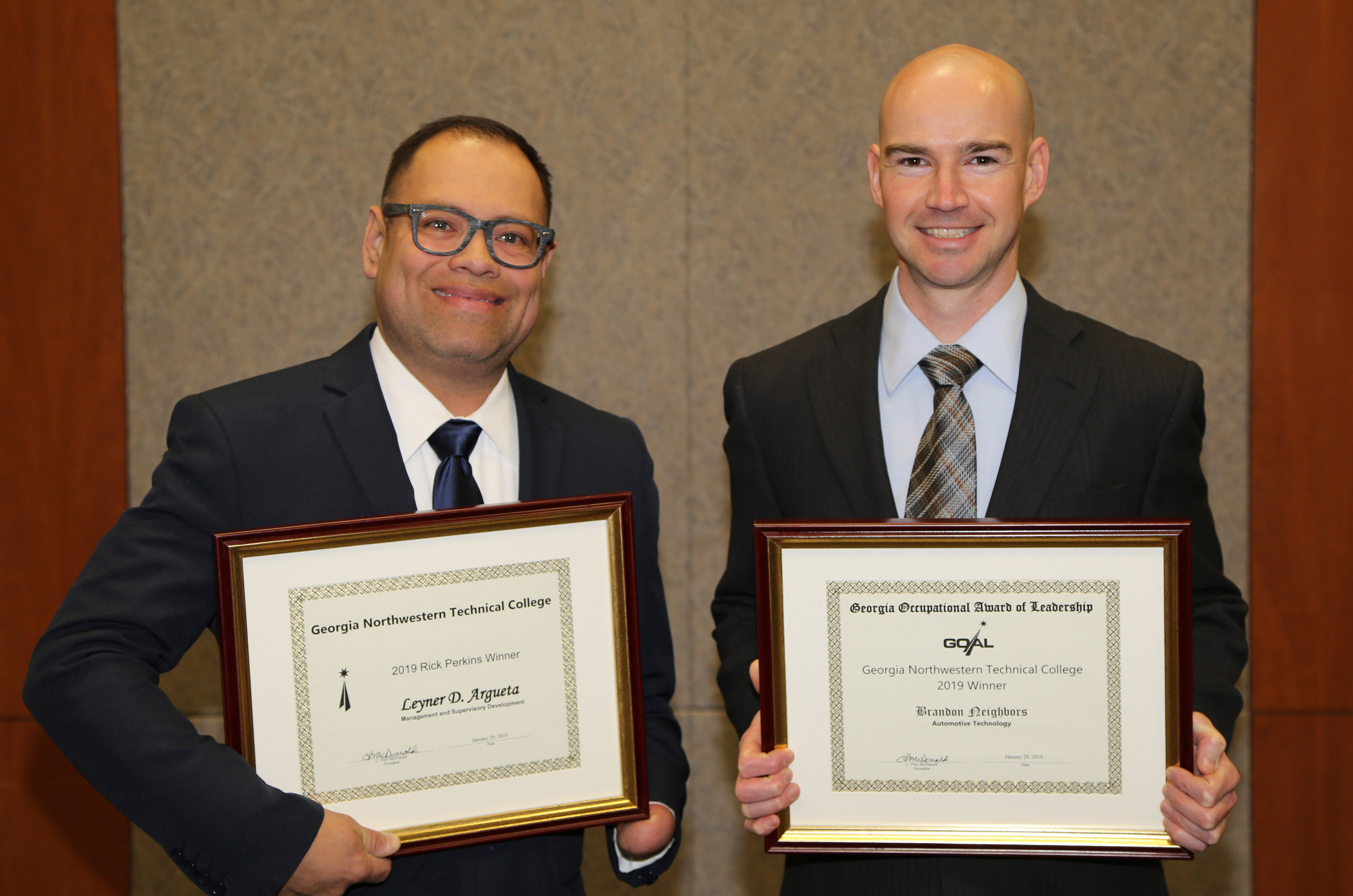 Harley Chastain, a resident of Calhoun who was chosen in December to represent Georgia Northwestern at the EAGLE Leadership Institute, was also recognized during the presentation. The Leadership Institute recognizes and honors those students who have demonstrated superior achievement in Adult Education classes and programs.

Neighbors is a student on the Walker County Campus and was nominated by Troy Peco, assistant dean of Industrial Technologies and director of GNTC’s Automotive Technology program. Peco was the Technical College System of Georgia’s (TCSG) Instructor of the Year in 2013.

“Brandon is an exceptional student that has a work ethic and passion for learning and his drive and ambition is contagious to other students,” said Peco. “He has always risen to the occasion and has taken the leadership role on group assignments with other students.”

Neighbors was selected from a group of four semi-finalists for his presentation on technical education by a panel of judges representing business, industry and higher education in the northwest Georgia region.

“As a husband and father, I needed to attend a school close to me rather than moving my family to pursue an education,” said Neighbors. “Technical colleges are right in our communities.”

“I wanted a school that can work with my family’s busy schedule, that offers classes day and night, especially at the age of 38 with two children in school,” continued Neighbors.

Neighbors was the director of Youth Ministry at Rock Spring United Methodist Church, 2013-17, and was an Officer in the United States Marine Corps, 2002-10.

“For the past five years, I have spent one to two weeks each summer as a team leader for our church’s mission in Puerto Rico,” said Neighbors.

As the 2019 GOAL Winner for Georgia Northwestern, Neighbors will move to the regional competition and if chosen as a regional winner he will compete at the state level against winners from the other regions of Georgia. A panel of leaders from business, industry, and government will choose the Technical College System of Georgia’s GOAL winner for 2019 and recipient of the GOAL medallion. The 2019 Student of the Year and state GOAL winner will serve as TCSG’s student ambassador during a number of system and college functions throughout the year.

An instructor at Georgia Northwestern since 2015, Leyner Argueta teaches Management and Supervisory Development on the Whitfield Murray Campus in Dalton. He is a resident of Calhoun and is bilingual in English and Spanish.

Prior to becoming a resident of Georgia, Argueta was a government sales account manager for CDW in Chicago. In this role he oversaw the logistics of all international sales, which included negotiating a multimillion dollar contract with the Department of Education of the Virgin Islands.

He was a senior real estate agent for JMAC Real Estate in Chicago, 2004-07; sales manager for D&K International in Elk Grove, Illinois, 1998-2003; and managing partner of golf manufacturing and distribution for Argado Inc. in Chicago, 1998-2000.

An active member of the community in Calhoun, he has served as vice chair of the Governing Team at Red Bud Middle School, 2014 to present; chairperson for the Board of Directors of Voluntary Action Center, 2010-16; and Governing Counsel at Red Bud Elementary School, 2011-14.

As GNTC’s Rick Perkins Instructor of the Year, Argueta will compete in the regional competition. If chosen as a regional winner, he will compete at the state level in the competition. A panel of leaders from business, industry and government will choose one instructor to be the 2019 Technical College System of Georgia’s Rick Perkins Instructor of the Year. The winner will receive a $1,000 cash prize.

The Rick Perkins Award winner serves as an ambassador for technical education in Georgia. He or she will make many public appearances throughout the year, including addressing both chambers of the Georgia General Assembly.