Macey Morgan, a Business Management and Nursing student from Dalton, was named Georgia Northwestern Technical College’s (GNTC) 2018 Georgia Occupational Award of Leadership (GOAL) winner and Stephanie Kinman, an English and General Education instructor from Calhoun, was selected as the college’s 2018 Rick Perkins Instructor of the Year.

William Nichols, a resident of Calhoun who was chosen in December to represent Georgia Northwestern at the EAGLE Leadership Institute, was also recognized during the banquet. The Leadership Institute recognizes and honors those students who have demonstrated superior achievement in Adult Education classes and programs. 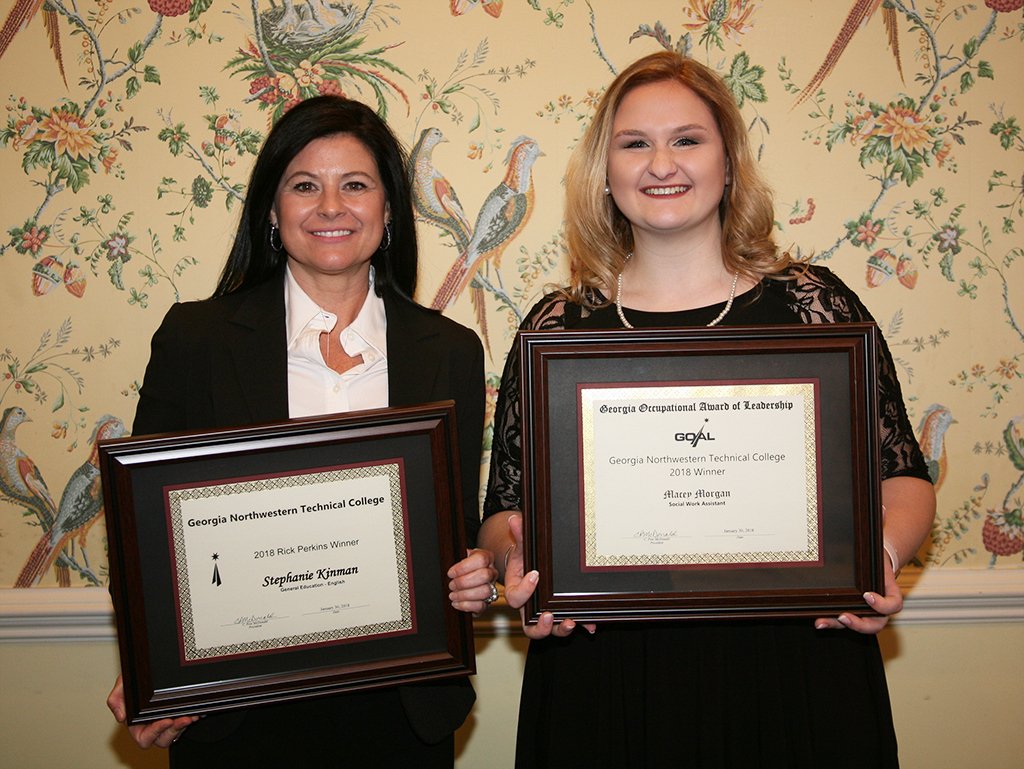 Morgan, GNTC’s GOAL winner, is a student on the Floyd County Campus and was nominated by Lisa M. Russell, English instructor at GNTC.

“Her strong work ethic is evident in her revision work,” said Russell. “Not every student can succeed in an online writing class, but she did and also helped the other students to do well by encouraging them.”

Morgan was selected from a group of three semi-finalists for her presentation on technical education by a panel of judges representing business, industry, and higher education in the Northwest Georgia region.

“I was looking to transfer to another college when I began hearing endless wonderful things about Georgia Northwestern,” said Morgan. “I have experienced outstanding instructors who care about my success and most importantly I have received the best education that anyone could ever dream of.”

“Technical education is changing our community in many ways,” said Morgan. “Georgia Northwestern Technical College is teaching and training its students with hands-on experiences to prepare them for the work force.”

As the 2018 GOAL Winner for Georgia Northwestern, Morgan will move to the regional competition and if chosen as a regional winner, she will compete at the state level against winners from the other regions of Georgia. She will receive an all-expense-paid trip to Atlanta. A panel of leaders from business, industry, and government will choose the Technical College System of Georgia’s (TCSG) GOAL winner for 2018 and recipient of the GOAL medallion. The 2018 Student of the Year and state GOAL winner will serve as TCSG’s student ambassador during a number of system and college functions throughout the year.

Stephanie Kinman, English and General Education instructor on the Floyd County Campus, was selected as GNTC’s 2018 Rick Perkins Instructor of the Year.

Kinman was chamber ambassador for the annual fundraiser at Rome Floyd Chamber in 2017 and is bilingual. At GNTC, she has served on multiple committees and sub-committees related to strategic planning, student orientation, retention, and curriculum development.

“I have been a Spanish teacher, a probation officer, and I currently work for the Technical College System of Georgia. What ties all of these moments together in my life is that I was a resource,” said Kinman. “I realized that I had found my love and my calling for growing individuals because I was their resource and I was their support.”

As GNTC’s Rick Perkins Instructor of the Year, Kinman will compete in the regional competition. If chosen as a regional winner, she will compete at the state level in the competition. A panel of leaders from business, industry, and government will choose one instructor to be the 2018 Technical College System of Georgia’s Rick Perkins Instructor of the Year. The winner will receive a $1,000 cash prize.

The Rick Perkins Award winner serves as an ambassador for technical education in Georgia. He or she will make many public appearances throughout the year. The last state winner to represent GNTC was 2013 Rick Perkin’s winner, Troy Peco, director of the Automotive Technology program.

Georgia Northwestern Technical College provides quality workforce education to the citizens of northwest Georgia. Students have the opportunity to earn an associate degree, diploma, or a certificate in business, health, industrial, or public service career paths. This past year, 16,402 people benefited from GNTC’s credit and noncredit programs. With an annual credit enrollment of 7,750 students, GNTC is the largest college in northwest Georgia. GNTC has an additional enrollment of 8,652 people through adult education, continuing education, business and industry training, and Georgia Quick Start. For more information about GNTC, contact a Student Help Center at any one of our six campus locations at 866-983-4682. GNTC is a unit of the Technical College System of Georgia and an Equal Opportunity Institution.