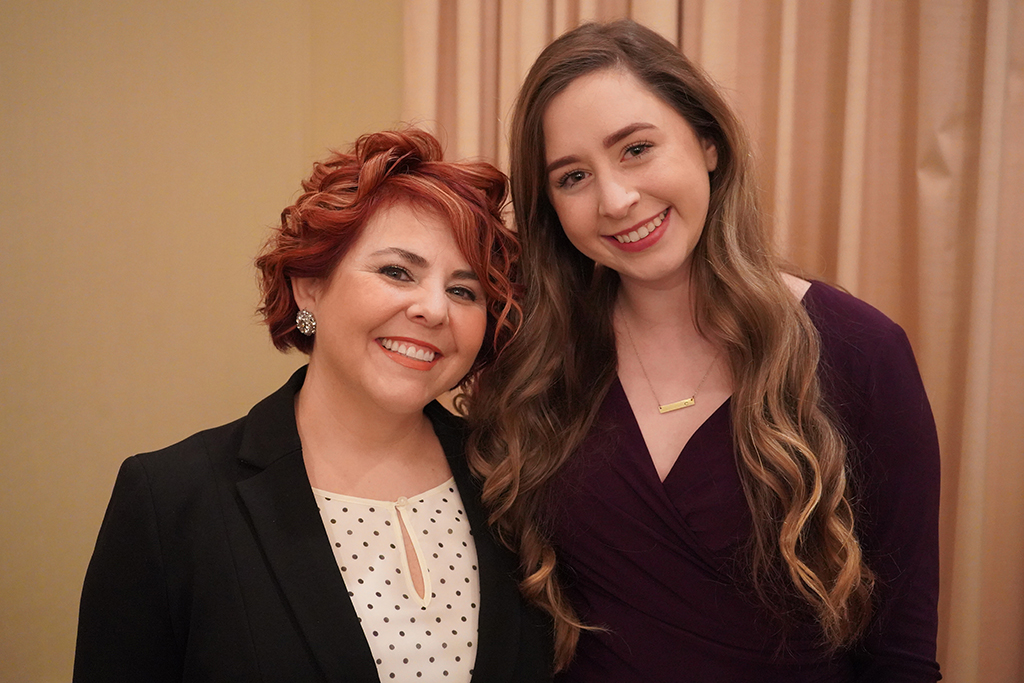 Dawn Irwin, instructor of Echocardiography at GNTC, nominated Bullock for the GOAL award.

“Christina displays exemplary work ethics like loyalty to her studies and her peers, honesty in class work, trustworthiness in confidential manners and reliability in her classroom attendance,” said Irwin. “Her fellow students look to her for guidance.”

A panel of judges representing business, industry and higher education in the northwest Georgia region selected Bullock from a group of four semi-finalists for her presentation on technical education at the Rome Floyd Chamber on Jan. 21.

“The reason I am here in front of you is because I have been given a chance at a better life at Georgia Northwestern Technical College,” said Bullock, a resident of Calhoun. “I knew the skills I would learn as an echocardiography technician would improve lives all around me.”

A native of Rome, Bullock said that after her mother, who suffered from alcoholism and schizophrenia, was incarcerated she had to enter the foster care system at the age of four.

She spent most of her childhood in the foster care system until her biological father, who did not know she existed until she was seven, took her in.

“He welcomed me with open arms and I had a great rest of my childhood, but that quickly came to a stop when he was disabled at work,” said Bullock.

After her father developed small-cell lung cancer, an aggressive form of cancer with a very low survival rate, she had to get a job to support them both and pursue a post-secondary education.

“He was already disabled and barely making ends meet and I needed to get a job to help us both,” said Bullock. “He started his first round of chemotherapy and radiation, while I started my first job at Office Depot and first semester at Georgia Northwestern.”

For the past year, Bullock had to cope with the loss of her father while keeping up with a full-time job and being a full-time student. She said that part of the reason she chose GNTC was because it was in her community and she wanted to be in the medical field.

“Georgia Northwestern was the only college around me with an accredited Ultrasound program meaning I would have a better chance of getting a job after graduation,” said Bullock. “This school has guided me through all of the obstacles I’ve had to overcome.”

As the 2020 GOAL Winner for Georgia Northwestern, Bullock will move on to the regional competition and if chosen as a regional winner she will compete at the state level against winners from the other regions of Georgia. A panel of leaders from business, industry and government will choose the Technical College System of Georgia’s GOAL winner for 2020 and recipient of the GOAL medallion. The 2020 Student of the Year and state GOAL winner will serve as TCSG’s student ambassador during a number of system and college functions throughout the year.

As the grand prize, Kia Motors Manufacturing Georgia will award a new automobile to the state GOAL winner.

An instructor at Georgia Northwestern since 2013, Mandy Jones teaches English on the Walker County Campus in Rock Spring. She is a resident of Chickamauga and is a dual enrollment instructor for Gordon Lee High School and LaFayette High School.

Jones said that at GNTC she wanted to adjust her lesson plan so that it was more applicable to her students once they started their careers.

“Creating relevance between my students’ needs and my curriculum was an essential part of becoming an effective English instructor at a technical college,” said Jones.

She decided to do some research and found that many Georgia employers cited the lack of soft skills as a concern in their young employees.

“Deficiencies in soft skills may cause Georgia business leaders to hire outside of state lines,” said Jones.

Jones serves as a field reporter for live athletic broadcasts for Gordon Lee and LaFayette High Schools and is a current nominee for north Georgia’s “Best of the Best” Teacher of the Year award.

As GNTC’s Rick Perkins Instructor of the Year, Jones will compete in the regional competition. If chosen as a regional winner, she will compete at the state level in the competition. A panel of leaders from business, industry and government will choose one instructor to be the 2020 Technical College System of Georgia’s Rick Perkins Instructor of the Year. The winner will receive a $1,000 cash prize.

The Rick Perkins Award winner serves as an ambassador for technical education in Georgia. He or she will make many public appearances throughout the year, including addressing both chambers of the Georgia General Assembly.

Georgia Northwestern Technical College provides quality workforce education to the citizens of Northwest Georgia. Students have the opportunity to earn an associate degree, diploma, or a certificate in business, health, industrial, or public service career paths. This past year, 12,454 people benefited from GNTC’s credit and noncredit programs. With an annual credit enrollment of 7,730 students, GNTC is the largest college in Northwest Georgia. GNTC has an additional enrollment of 4,724 people through adult education, continuing education, business and industry training, and Georgia Quick Start. GNTC is a unit of the Technical College System of Georgia and an Equal Opportunity Institution.