While his fellow graduates were walking across the stage in December, Georgia Northwestern Technical College (GNTC) graduate Dusty Powell was driving through Oklahoma on his way to the SpaceX headquarters in Hawthorne, California where he would begin work the following week.

After five interviews with one lasting well over five hours, the two degree holding GNTC alumnus was ready to begin what he called his dream job as Maintenance Technician at the aerospace company.

“I was like a kid in a candy store,” the 23-year-old said of his SpaceX tour. “Everything is done in-house and I get to be a part of that.”

Powell had already completed an associate degree in the Instrumentation and Controls Technician program at the time of his interviews last year, and wrapped up his second associate degree in Industrial Systems Technology at the end of the fall 2019 semester. Along with his two degrees, Powell also holds a level two Certified Control Systems Technician (CCST) from The International Society of Automation.

The two degrees and the certification are really what set him apart in the interviews Powell said. To obtain his certification he had to have seven-years of experience which he obtained through working in Polk County and in class at GNTC. 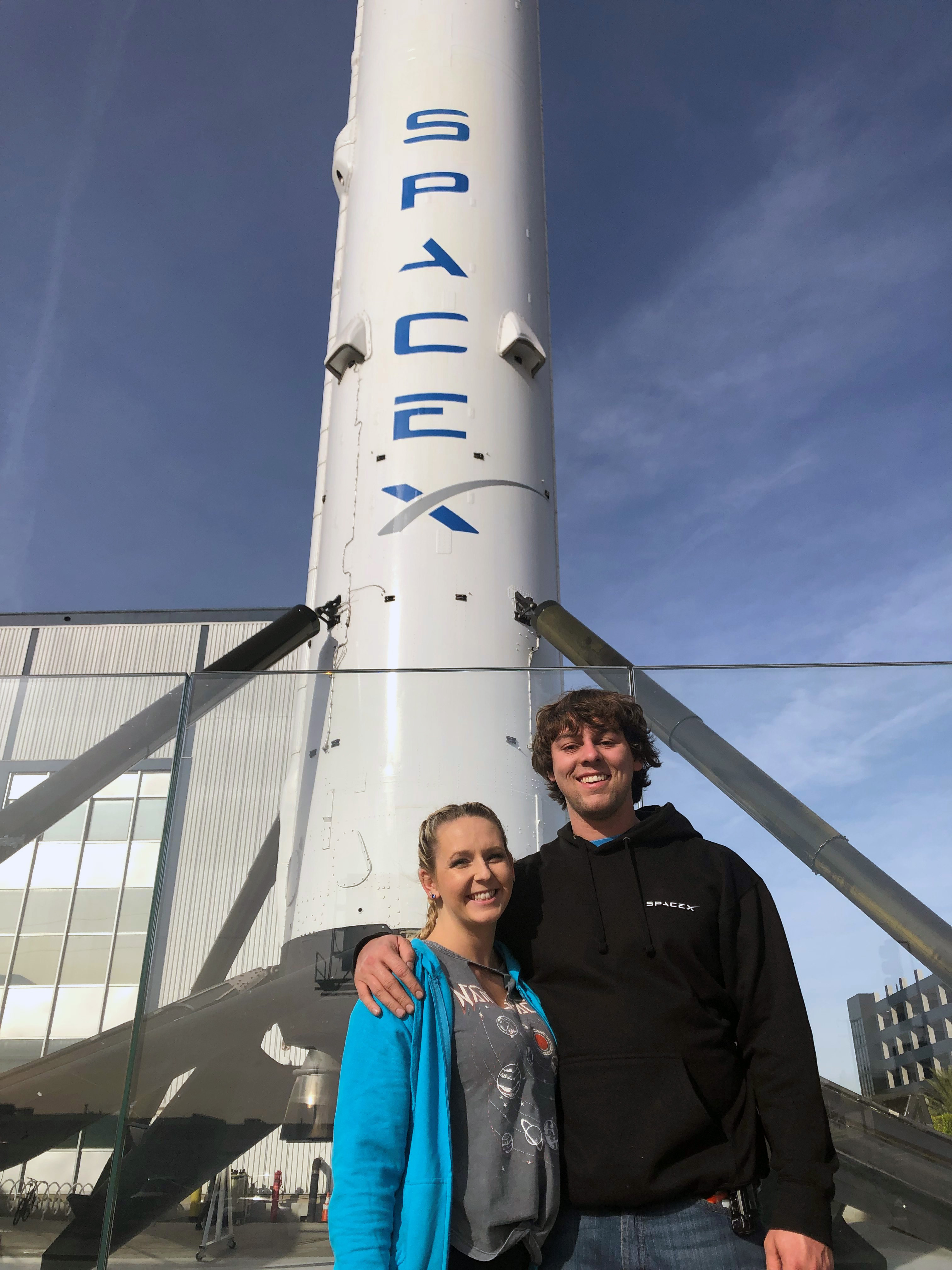 GNTC alumnus Dusty Powell (right) stands with his girlfriend D’ana Gay in front of the SpaceX headquarters in Hawthorne, California where he works as a maintenance technician.

“Everything I did in class was hands-on and relevant to my field,” he said. “I use this stuff every day.”

According to Dick Tanner, program director and instructor of the Instrumentation and Controls program, many of his students find work while finishing up classes or just after graduation.

“Dusty is a hard student to forget,” Tanner said. “One thing about him was he would volunteer for tour groups and job fairs. It can be hard to find people to talk about themselves and the program.”

Powell said he began his education at GNTC in 2014 and sprinkled his classes into his 50-60-hour work week. He would often take classes early in the morning and then head off to work until midnight before doing it all over again. Five years later with two associate degrees under his belt, the 23-year-old said his education is far from over.

“This field is constantly growing and changing,” he said. “I have to stay in step and will be working on my education until I retire.”

Powell was approached three times by the automation company Siemens AG to work as a troubleshooter Tanner said. He will do a similar job for SpaceX and handle equipment from an electrical side. Powell will work on troubleshooting, motor starting, working with electrical components, calibrating devices, as well as regular machine maintenance.

“There is always a need for skilled workers,” said Tanner. “You don’t always need a four-year degree to succeed in the world today.”

After about six months to a year, SpaceX wants Powell to interview in the Automation department and start working on Programmable Logic Controllers Tanner said. “It’s extremely pleasing to see him do well in life, it’s why I do what I do.”

SpaceX designs, manufactures and launches advanced rockets and spacecraft. The company was founded in 2002 to revolutionize space technology. The company has gained worldwide attention for a series of historic milestones. It is the only private company capable of returning a spacecraft from low Earth orbit, which it first accomplished in 2010. The company made history again in 2012 when its Dragon spacecraft became the first commercial spacecraft to deliver cargo to and from the International Space Station. SpaceX successfully achieved the historic first reflight of an orbital class rocket in 2017, and the company now regularly launches flight-proven rockets. In 2018, SpaceX began launching Falcon Heavy, the world’s most powerful operational rocket by a factor of two.